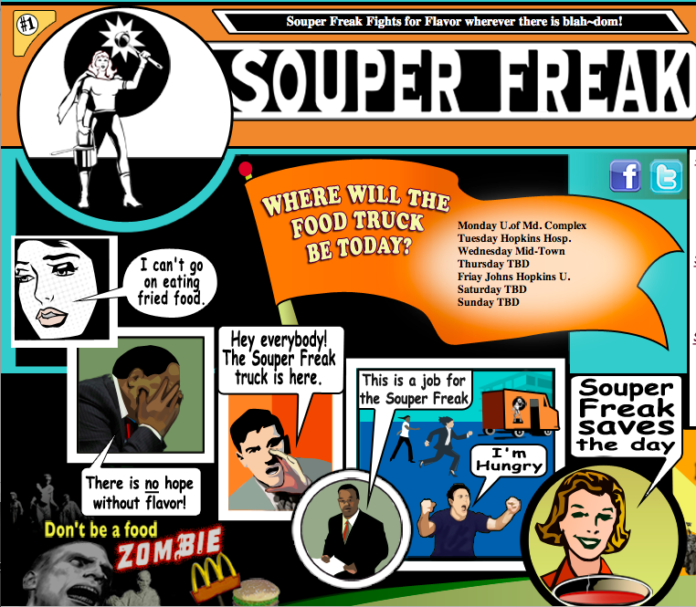 Los Angeles started it, with fancy gourmet food trucks popping up all over the place, winning fans and Twitter followers among the city’s foodies—and then promptly getting beaten down, ticketed, and told to move along by the powers that be. D.C. and New York followed, with brave mobile food vendors facing similar obstacles. And now Baltimore is joining the fracas, with its very own screwed up food truck fight.

The article opens with the sad tale of Irene Smith, the owner and operator of a bright orange food truck dubbed Souper Freak. Smith is clearly the good guy in the piece, an entrepreneur looking to make an honest living by providing a product her customers love. She’s downhearted about having a tough time finding somewhere to vend, but she’s still trying to live the dream:

“You would think a place would be excited about this as a possibility in their city,” she says.

Naturally, a Baltimore city official read the piece, missed the point, and promptly cast himself in the role of soupervillain:

Smith said she was shut down by city official Alvin O. Gillard (director of the Baltimore Community Relations Commission [and head of the city’s street vendor board]), who, Smith said, told her that he had been dispatched to shut down all of the city’s food trucks in the aftermath of Jill Rosen’s article yesterday about the fits and starts of Baltimore’s food trucks.

The same ugly scene went down at a local cupcake truck as well, with threats of fines and other dire consequences. Smith has a mobile vending license, but was told she needed the entirely different on-street vending license as well—something she can’t get without booking a spot at a street vendor board meeting. Of course, the board only meets every other month and they’re pretty busy, so if she’s lucky she might squeak in a spot in August.

This particular piece of brilliant public relations got the mayor’s attention, and now Gillard is singing a different tune:

Gillard told me that that the Mayor has asked the Street Vendor Board, in the aftermath of today’s misunderstandings, to conduct outreach to Baltimore food trucks and to work with Health and Housing to assist Baltimore’s them in coming under regulatory compliance.  There will be an indeterminate grace period while this outreach is being conducted.

In other words, Baltimore vendors now live in the same state of regulatory limbo currently enjoyed by the brethren in many other major cities. Welcome to the big leagues, Baltimore!

Update: There are those who claim it all began in Portland. They may be right. But even Portlanders are having regulatory troubles as they try to bring beer and food trucks together at long last.