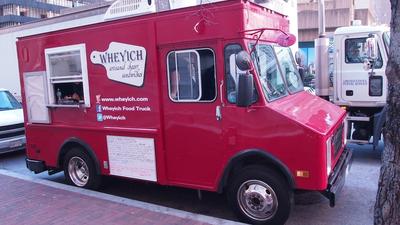 By Richard Gorelick | The Baltimore Sun

Meet Wheyich, Baltimore’s newest food truck. Specializing in “artisanal cheesy sandwiches,” Wheyich rolled off the line in mid-December and started to hit the streets regularly right after the first of the year.

Wheyich (pronounced “which”) is from Ashwini Persaud, a recent transplant to Baltimore.  In an email, Persuad wrote, “I was an employee of Morgan Stanley for over seven years. As time grew on, I started considering changing career paths. I considered staying in finance but felt that doing what I loved, cooking and feeding everyone, would be a more enjoyable task. So I purchased a food truck, quit my job and opened Wheyich.”

The cherry red truck has established a weekly schedule: Monday at Baltimore and Greene streets, Tuesday in front of the Morgan Stanley Building in Fells Point, Wednesday at Commerce and Pratt streets, Thursday near the Safeway in Canton and Friday at Charles and Baltimore streets.