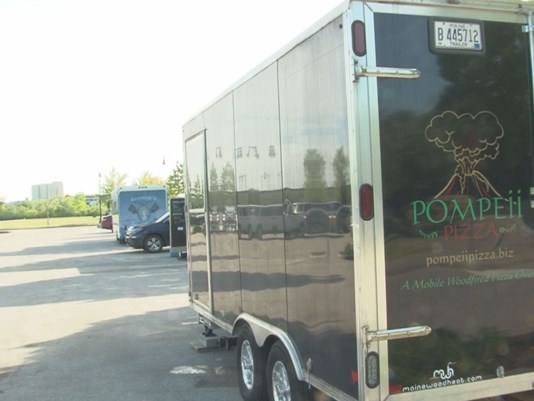 BANGOR, Maine (NEWS CENTER) — On Monday the Bangor City Council approved an ordinance amendment that will now allow up to “five seasonal concessions” on the waterfront, including giving them the option to extend their hours.This means the Bangor Waterfront will be getting a lot tastier over the next few months, with two food trucks open and a third about to open up.Tracy Willette, Director of Parks and Recreation said two more will be parking there this summer bringing the total to 5 but he won’t reveal who they are just yet.

Travis Carey of Pompeii Pizza said business has gone up since they opened on the waterfront in 2013.

“As small business owners ourselves, we’d love to see other small businesses start out so you know having competition in the area all that really does is keep as sharp and on our game and it brings more people down to the waterfront” said Carey who is the son of the owners of Pompeii Pizza.

The two new food trucks are driving onto the scene because the City Council changed an ordinance allowing for up to “five seasonal concessions”, including allowing them to be open until midnight.

“I think that if Bangor can become like a food truck kind of town, I think it just benefits everybody, it’s just a really interesting way to be able to test out new foods, be able to have different kinds of foods” said Sarah Wilder.

Grammy’s Grilled Cheeses and Melts is also on the waterfront – owned by The Family Dog, they are slated to open their windows on June 4th.

“Work with the other venders to really make that a destination place where people wanna come down experience what’s going on down there with the food trucks the food, the entrepreneurs around Bangor that are working to make that a special thing” said Matt Robinson, Assistant to the GM at The Family Dog in Orono.

There are also minor amendments to location requirements and other clarifications.

So no matter what you’re into, there’s sure to be something for everyone