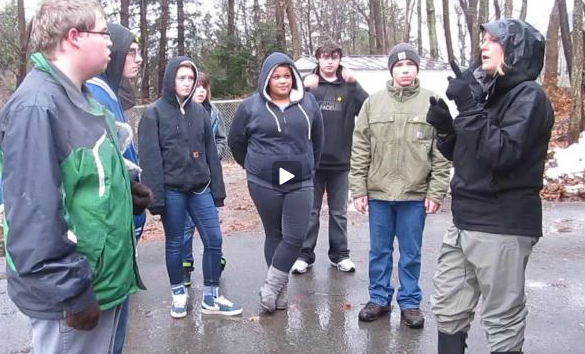 BATH, Maine — “Would you like a carton of half and half?” asked a volunteer who was handing out free food to the needy on Tuesday.

“Oh my, you don’t know how long it’s been since I could afford something like that,” said the recipient.

“Would you like more than one?” asked the volunteer.

The woman considered the question for a moment before waving away a second carton. “No thanks. One will be plenty for me. Thank you so much and merry Christmas,” she said, walking away with a smile and box brimming with food.

Sometimes the simplest things can brighten a person’s day, like a quart of half and half. It’s moments like those that have helped sustain all the volunteers and donors who have kept the Bath Area Mobile Food Truck in operation for the past six years. It costs about $1,000 to fill the truck with food, which is then distributed to between 250 and 325 families on the last Tuesday of every month. That same food would cost $8,000 at a grocery store, according to Kimberly Gates, the organization’s coordinator.

“These families need their food,” said Gates, who added that almost 70 percent of children in the area qualify for free or reduced-cost lunch at school.

On Tuesday, amid a frigid downpour in the parking lot of Grace Episcopal Church, the usual cadre of volunteers was joined by a group of students from Jobs for Maine Graduates at nearby Morse High School. In addition to helping families fill boxes with food and carry them to their cars, the students raised the $1,000 necessary to fund Tuesday’s offering.

According to Maria Morris, Morse’s Jobs for Maine Graduates specialist, her class receives $1,000 a year to distribute to charity in any way they see fit. This year they chose to award two $500 grants, including one to the Bath Area Mobile Food Truck.

“A truckload of food costs $1,000 and they wanted to fund an entire truckload,” said Morris. “They jumped right in.”

The students held a bake sale and partnered with residents of Washington House, a senior citizen home in Bath. They had collected about $425 earlier this year when they visited the Bath Sunrise Rotary Club, which surprised them with a $75 donation to fill the gap.

Justin Collander, a junior from Phippsburg, said helping the program succeed, at least for this month, was rewarding.

“It’s raining out, but in my head it’s still sunny,” said Collander. “It just makes me feel better to do this.”

Toni Gregoire, a senior from Phippsburg who is president of leadership for Morse’s JMG program, said the activity helped open her eyes to the struggles of others.

“You get to meet every type of person out there from every situation,” she said. “I just don’t really take for granted what I have anymore.”

Student-led fundraiser produces $8,000 worth of food for needy families