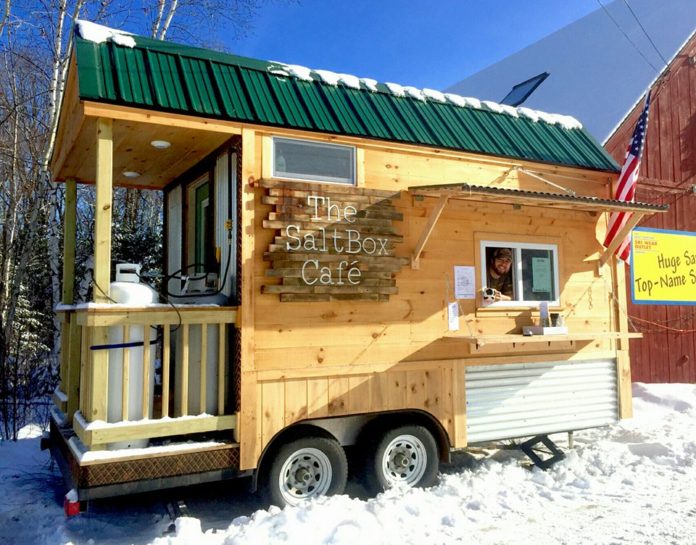 By Amy Wight  | The Sun Journal

NEWRY — “I wanted to find a way to stay in Maine,” food truck proprietor Matthew Glatz said of his decision to try self-employment.

“All of my friends left the state after high school or college,” he said.

Glatz recently opened The SaltBox Cafe in the parking lot of The Great American Ski Renting Company on Sunday River Road. From Thursday through Monday, he serves up breakfast sandwiches and lunches to go from 7:30 a.m. to 1 p.m. and until 4 p.m. on Sundays.

A lifelong Sunday River skier, Glatz lives in Portland for part of the week but has found a way to combine the best of a ski-bum lifestyle with gainful employment.

After opening early and cooking all morning, when he closes The SaltBox Cafe in the early afternoon, he is free to head for the mountain to take a few runs.

A background in culinary arts, a longtime interest in the tiny house concept, and a conversation with a friend, Nick Rofe, of Portland, inspired The Saltbox Cafe.

“This was his first tiny house project,” Glatz said. “He was pretty excited.”

He and Rofe collaborated to design a fully-equipped commercial kitchen on wheels. With the help of several other friends, and access to construction space in a warehouse belonging to Glatz’s former boss, they were able to build it from the ground up, in just seven and a half weeks.

Starting with a trailer that Glatz bought new, they used mainly recycled construction materials and lumber seconds purchased from a building supplier for 70 percent off. The SaltBox Cafe sign and outside counter were built of reclaimed flooring from a friend’s barn in Bridgton.

Glatz searched for good deals on commercial cooking equipment and was able to locate almost everything he needed secondhand, including a refrigeration unit from the Oxford Hills Technical School in Paris.

“I found the gas stove on Craigslist,” he said, indicating the gleaming commercial range with two large burners and generous griddle space.

The ventilated stove hood came from a Chinese restaurant in Portland. It was the wrong size for the space, but Glatz was able to modify it with a metal grinder, then had a cap welded on to make it the right height.

The cost, including welding and the installation of a fire-suppression system, was $700. If he had had to buy the same equipment new, he said, it would have set him back about $6,000.

The decision to bring The SaltBox Cafe to the Sunday River Road for its inaugural season came about when Glatz recognized that it would be difficult to compete with sit-down restaurants in Portland in the wintertime.

“I decided to bring it up here to Bethel because people who live up here, and people on their way to ski, are already ready for the cold,” he said.

He offers several gourmet breakfast sandwiches and burritos, all under $8, and all prepared to order.

His “Brown Bag Ski Lunch” features hearty sandwiches — turkey and cheddar, ham and Swiss, a BLT or a loaded veggie and hummus — on a choice of bread. They’re accompanied by a granola bar, chips and a bottle of water, all packed into a brown paper lunch bag for $10.

Specials change weekly, and sandwiches are served with gourmet condiments.

Disappointed with the commercial mayonnaise and sauces available, Glatz decided to create most of his own from scratch, from the tangy Memphis barbecue sauce on his pulled pork breakfast burritos and sandwiches, to a house Dijon mayonnaise he whisks up on-site from fresh ingredients.

When ski season ends, he plans to relocate The SaltBox Cafe to Portland. The food truck is fully self-contained, with an RV pump, water tanks, a generator and the gas range, so he can move it wherever he decides to go.

For the remainder of the ski season, the cafe is open Thursday through Monday at 101 Sunday River Road.

If you get there early enough, Glatz said, there’s a special perk — the first customer of the day always gets free coffee.