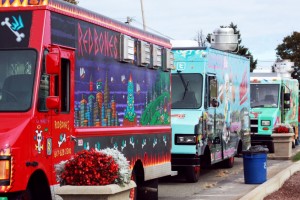 Earlier this month, the City of Boston held its annual food truck lottery, a process in which the Hub’s mobile vendors compete (in a friendly manner) for the most coveted spots around town. The results are in, and today the city announced the 2013 spring and summer food truck schedule.

The schedule goes into effect on April 2, 2013, and I’ll admit I spent a good five minutes planning out my lunches based on which trucks will be near my office during the week. Besides filling your own needs though, perhaps what’s most exciting to take away from this schedule is that there is now a huge variety of food trucks populating the Hub’s streets.

In total, there are 56 food trucks ready to hit the streets this spring, which is nearly four times the amount that started when the pilot program launched in 2011.

In addition to the new vendors, the 2013 program boasts 18 public sites for trucks to be stationed, including three cluster sites, consisting of two or three trucks at a time.

Changes to existing spots for 2013

Personally, I’m most excited for the variety that these new food trucks add to the existing roster here in Boston. April can’t get here fast enough. Looks like we’re going to have to update the slideshow below very soon.