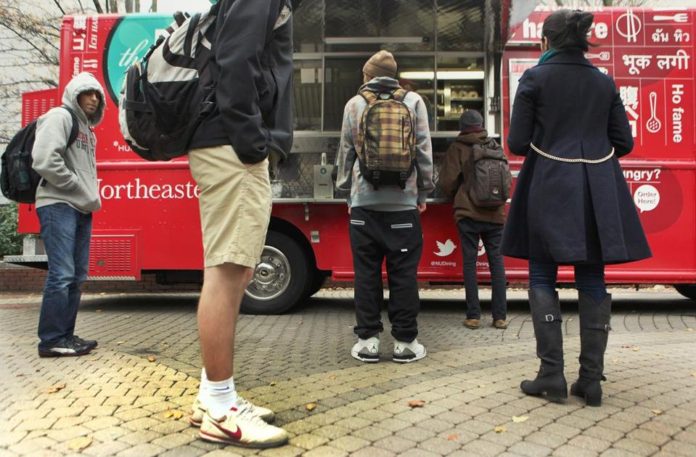 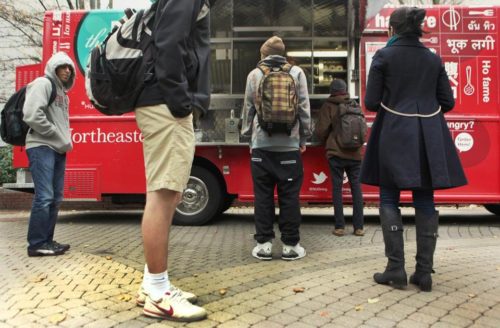 The tantalizing aromas of earthy empanadas and tangy barbecue chicken mingling in the air lure a small crowd to the rumbling, bright red truck parked smack in the middle of Northeastern University’s Snell Library Quad.

Outside the Hungry Hungry Husky food truck, students and professors jockey to scan the menu. Reaching up to a delivery window for a heaping tray of pita chips and some fresh guacamole, Lauryn Coccoli gushes, “Ah, you’re the best, thank you so much!” She is met with an appreciative nod by a worker inside the school’s food truck.

“Whenever he’s here, I’m here,” says Coccoli, a graduate student at Northeastern. “It’s absolutely convenient, cost-effective, and the food’s great; it tastes better and is cheaper than in there,” she says, gesturing to the Curry Student Center, which houses nearly 10 food court eateries.

Northeastern and the University of Massachusetts Amherst have food trucks and Boston University is trying to start one, joining a national trend of colleges launching their own.

The mobile eateries, which have exploded in popularity in cities around the nation, provide a great solution for colleges with centralized dining and decentralized dorm accommodations, giving food programs new income streams and helping them hold onto student food dollars that might otherwise be spent elsewhere. It also happens at a time when colleges, with their surging tuition costs, are expanding amenities amid tougher competition to attract and keep students.

“It’s a matter of convenience; it’s a matter of bringing services right to the students. If we could make the truck be closer to residential buildings, you could come down in your jammies and get something later in the day,” says Barbara Laverdiere, director of dining services at BU, currently spearheading the school’s effort to establish its own food truck. Laverdiere explains the appeal of university-run trucks as multifaceted, with convenience, variety, and flexibility at the helm.

Around Boston, Northeastern was the first to institute its own food truck, debuting Hungry Hungry Husky (H3) in November 2011.

Northeastern’s director of dining services, Maureen Timmons, says she often looks to the West Coast for culinary inspiration. Doing so in 2009 led her to the mobile food trend. She noted that students flocked to the gourmet trucks doling out ethnic meals at reasonable prices, particularly around the University of Southern California and the University of California-Los Angeles. “We thought, why can’t we do that? It seemed like a fun way to deliver food to the students and meet them where they are.” Timmons set the gears in motion, and in about two years, H3 was up and running.

“It’s been great. Students are always interested in more variety, [and the food truck is] fun and playful, and a little more exciting,” says Timmons.

Depending on the time of year or school events, Timmons is able to redirect the truck to go where students are. Whether positioned outside Northeastern’s Snell Library at midnight during finals week or in front of Parsons Field as a soccer game breaks for halftime, Timmons says, “we can do anything on the food truck.”

“We want to be the leader of the pack, and with this, we were,” says Toong of the vehicle, which cost around $140,000 to customize. “We take food seriously and students recognize it. The students like it because it’s different. . . . They see it made in front of their eyes made-to-order. At the end of the day, the food has to be good.”

The trucks, which serve far fewer customers than traditional dining halls, are able to be more flexible with menus and can provide more cooked-to-order offerings.

“We tweak the menu continually and change based on students’ feedback,” says Timmons. “It will always be a work in progress.”

“It was about looking at niches we felt we weren’t as strong in as we wanted to be,” says Laverdiere of BU’s prospective food truck offerings. “We’re trying to get an ethnically diverse menu that isn’t traditionally part of the menu. We want to enhance the overall meal plan; the more choices we’re able to add, the better.”

The popularity of food trucks has surged countrywide in recent years after originating on the West Coast. College food-service managers around the nation also spotted the trend and over the past five years, universities from Seattle to Tuscaloosa, Ala., began scrambling to institute their own mobile eateries.

The phenomenon is spreading so quickly, in fact, that it’s difficult to accurately track it, according to Rachel Warner, director of communications and marketing at the National Association of College and University Food Services.

“It’s still a relatively new trend in the college and university market, [but] in the last couple of years, food trucks have really taken off,” says Warner, estimating their on-campus presence to have been roughly “fewer than a dozen five years ago [but] as many as 100 now.” Warner’s group represents more than 550 colleges throughout North America.

Aramark, a food service company for more than 600 colleges throughout the country, first introduced a collegiate food truck in 2010. This fall, the company brought an additional 10 food trucks to college campuses, nearly doubling their presence within a year. Now, 22 campuses under Aramark are served by food trucks. Company officials say they typically contract with a truck provider and share revenue with the school.

Bon Appétit Management Co. provides culinary services to about 100 colleges around North America. Of its collegiate clientele, three universities have food trucks in operation, two schools are close to rolling trucks out, and an additional handful are in early discussion stages.

“Five years ago, we had none. But starting around 2009, we began noticing how upscale food trucks were growing in popularity in cities,” says Bonnie Powell, director of communications for Bon Appétit. “The students really seem to love them.”

The appeal of food trucks to students is apparent, but there is also a financial incentive for the colleges.

Besides additional revenue from regular walk-up customers, many college food truck programs allow students to use special dining plan credits or, in Northeastern’s case, retail Husky Dollars to buy meals; other schools including UMass-Amherst do not. Still other colleges, such as Massachusetts Institute of Technology, allow independent trucks on campus and benefit in other ways.

“We were [one of the] first campuses in the country to embrace the food truck concept,” says Michael Myers, associate director of dining services at MIT. “The reason they were brought on campus [is because] in that particular area, over by the Kendall T stop, there were very few food service options. We really needed to fulfill that need.”

Dan Weidman, who works at an event-catering start-up near the Kendall Square food truck hub, isn’t much concerned about why the trucks are there, but is glad they are. “It’s really fresh food, and it’s unique,” he says between bites of a chickpea fritter from Clover Food Lab. “You get tired of going to Au Bon Pain and Chipotle and all those commercialized businesses, where this is independent. Why wouldn’t you want to go to that local place that’s only here?”

Like most independently run food trucks, none of the mobile retailers surrounding MIT accept the college’s Tech Cash or any other form of university food credit.

“A lot of it comes down to the financial model, to keep dollars within campus so [the truck’s revenue] can support campus initiatives,” explains Laverdiere. “If you have an external food truck that pulls up in front of an establishment that pays rent to the university, the options are great — but is that a business model you want? You want to be supportive of those who are supporting the university. Something that’s within our own system [makes for] good business. . . . It makes a lot of sense.”

BU is in the midst of preparing to launch its own food truck, Fan Boy, which will feature a menu of Asian fusion recipes and has already arrived on campus. But the vehicle remains dormant and unused, attesting to the obstacles that can face mobile eatery start-ups.

“We’re hitting a lot of roadblocks, quite honestly,” Laverdiere admits with a sigh, referring to legal hurdles the project is facing with city officials. “It’s more challenging to find acceptable places than we expected, and to apply to be on the official routes, there’s some challenges with that as well. We’re really trying to figure out where we can put the truck. It’s not an easy process.”

Myers agrees, saying he’s recently noticed a spike in interest. “Within the last year, we’ve seen [many] inquiries of individuals who’d like to operate food trucks on the campus . . . any type of cuisine you can think of.’’

At UMass Amherst, Toong, who is well underway with planning the introduction of Baby Berk II later this year, is a firm believer in the movement. “I think food trucks will always be needed on campus because of their mobility and multipurpose [abilities.] I think the future is bright, I think we’re just seeing the beginning of food trucks. . . . At the end of the day it’s a fun thing to do, [and it helps to] build a great community.”