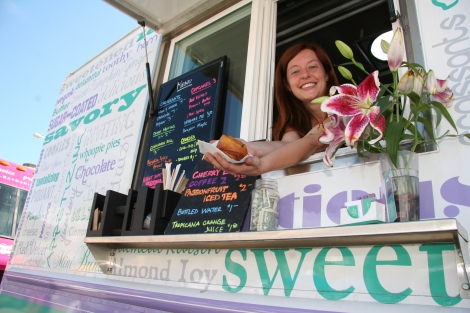 Every Monday at 8:30 a.m., Shannon Aten hits the streets with a food truck chock full of cupcakes, cookies, cinnamon rolls and croissants to sell to hungry customers.

Aten’s Tasterie Truck is one of several new food trucks making the rounds each week in Boulder County in what she describes as a growing national mobile food trend that is booming in cities like Portland, Seattle and Denver. Aten says she came up with the idea for Madeline, her pastry truck, while she was living in New York.

“There were food trucks everywhere, and I had a dream that I started a cupcake truck,” Aten says. “So I just started brainstorming and met up with a chef and decided to do it.”

Over the course of about four months, Aten worked with Nathan Miller, the former head pastry chef at The Kitchen, to draft recipes, find a commissary kitchen where they could prepare their pastries, purchase equipment and a truck, and obtain the proper permits.

The Tasterie Truck began making its rounds in April, which is right around the time that the City of Boulder was drafting a new set of rules and regulations for food trucks that wanted to operate within city limits.

On May 17, the City of Boulder unanimously approved an ordinance allowing food trucks to operate on private property as long as they have the permission of the property owners in industrial, business, mixed-use and downtown zoning districts. Food trucks can also operate in public rights-of-way in industrial zones like those in East Boulder and Gunbarrel, at the Boulder Municipal Airport, or as part of an organized special event like the Boulder Creek Fair, according to City of Boulder Ordinance 7787.

But the rules also dictate that food trucks must remain 200 feet away from other food trucks while in public, and 150 feet away from residential areas and brick-and-mortar restaurants, preventing them from selling food in some downtown areas like the Pearl Street Mall. The ordinance also prohibits food trucks from operating before 7 a.m. or after 9 p.m.

While local food truck owners say they’re grateful that the City of Boulder regulations allow them to operate, they still think the rules need to be changed.

“If a regular restaurant is allowed to be open until whatever time, why can’t a food truck be open until then as well?” asks T.J. Ingraham, one of the owners of Verde and Cheese Louise, two new food trucks. “It just doesn’t really seem fair.”

Aten says she hopes to get 2,000 to 5,000 signatures from people in the community on a petition that  calls on the City Council to allow food trucks to sell food between 10 p.m. and 3 a.m.

“Their opposition at this point is that we offer too much of a competition to the limited patrons, or that there are restaurants open, so we’re taking business away from those that are open late night,” Aten says. “But in my opinion, that’s not the case because a lot the places that are open are only open until 10 [p.m.] or maybe midnight and aren’t open at 1:30 [a.m.] when the bars let out.”

Molly Winter, director of the city’s Downtown and University Hill Management Division and Parking Services, says she doesn’t know if any changes will be made to the ordinance in the near future.

“We tried to come up with some- thing that would balance the needs of the different businesses,” Winter says. “I believe [the ordinance] had the majority support of council, and we worked with a lot of vendors in the downtown community. And I think that’s what we found worked best.”

While several new food trucks have popped up locally, there have also been a couple of casualties this year, including StrEat Chefs and Walnut-a-gogo, which closed its doors this month.

In the meantime, a group of local food trucks has been working together by coordinating weekly schedules to prevent from running into one another at the same location.

“We agreed on that because if I go there and there’s another food truck, I make less money and he makes less money, too,” says Seb Idée, owner of Seb’s Portable Wood-Fired Cuisine. “We want to help each other. If a location is good for me, I share the information with the others and tell them to try it another day of the week.”

Idée grew up in France, where he says food trucks have been popular for years, and came up with the idea to make a trailer with a wood-fired oven installed on it after working for Four Grand-Mère, a manufacturer of wood-fired ovens. With the help of his friend, the CEO of Four Grand-Mère, Idée researched, designed his oven, acquired the materials he needed, and constructed the oven on a trailer over the course of eight months while working another job on the side.

The Seb’s Portable Wood-Fired Cuisine menu varies each day depending on the produce they get from local farms, but Idée says that he and his staff cook pizzas, calzones, meatballs, lasagnas and quiches.

Ingraham says that these gatherings of food trucks in parking lots, called pods, are common in food truck cities like Portland.

“Five food trucks will meet in a parking lot, and it’s kind of like a mobile mini food court where you know you’re going to go to this location and have five options of really good food, and everybody’s kind of in it together rather than competing against each other,” Ingraham says.

He adds that he knew he wanted to sell authentic Sonoran-style Mexican food to local customers and decided to open a food truck instead of a restaurant because of the lower overhead costs. After about seven months of work, Ingraham says Verde’s truck, named Mary, will hit the streets within the next week or so.

Verde’s sister truck, Cheese Louise, is going to be serving up grilled cheese, set and build-your-own sandwiches to customers in early to middle August, Ingraham says. Other dishes on Cheese Louise’s menu include soups and Frenchies — battered, deep-fried cheese sandwiches covered in corn flakes. Frenchies were originally served at King’s Food Host, an old multinational food chain that used to have a restaurant in Boulder, and Ingraham says that he and partners K.C. Slager and John Sethney are including it on their menu to pay homage to the old-school-style diner.

Ingraham says that in the end, he thinks customers have a more personal experience at a food truck than they do at a restaurant because they can talk to the food truck owners and operators as they prepare the food.

“I’ve worked at enough places to learn that a smile and a friendly conversation is just so important not only to business, but also to life in general and making people happy with their experience,” Ingraham says. “We understand there’s hundreds of places that people could go to eat, but we want people to feel special when they come to eat at our food truck and feel like they’re wanted and not just another number on a ticket.”

For more information about where these trucks are located each week, check their websites, or their Facebook and Twitter accounts.