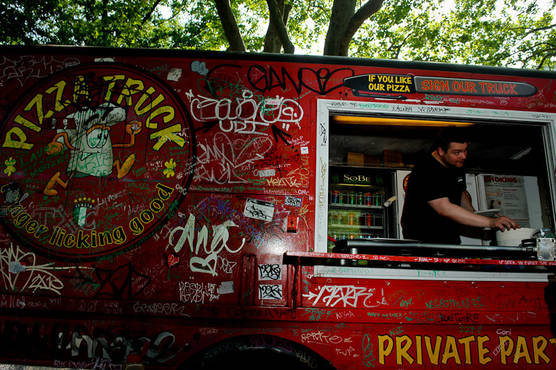 Governors Island kicked off another summer of sun-soaked food and drink events this weekend with the Brewers Pic-NYC. We dropped by on Sunday to grab a few beers and some snacks from some of our favorite summertime food trucks.  Beer was provided by Brooklyn Brewery, Goose Island and Sixpoint, with Sixpoint stealing the show with the launch of their new tallboys which people were buying up in armfuls before collapsing on blankets in the grass to enjoy them.

Guests had the choice of pairing their beer with some of the best of New York’s mobile vendors, including the just-launched Gorilla Cheese NYC serving grilled cheese sandwiches alongside tater tots and mac and cheese bites. Other vendors included the tequila-infused tacos of the Camarena Taco Truck with Suenos chef Jesse Vega (the first to sell out!), the sought-after New Jersey-based Kimchi Taco Truck. The Pizza Truck was selling both slices and whole pies since everyone knows that pizza and beer is a classic.

Spicy-seekers lined up for kati rolls and veggie biryani Indian food from the Desi Food Truck—our number one choice after a night of drinking. And even better during an afternoon while drinking!  Luxury-seekers were not neglected either and joined the long-line for Luke’s Lobster rolls filled with giant chunks of sweet lobster.  Vendors not on wheels included Jimmy’s No. 43 with fragrant grilled sausage and ‘kraut on crusty hunks of bread and Sour Puss Pickles selling jars of briny vegetable goodness (seriously, have you tried their pickled curry cauliflower?).  For dessert Cupcake Stop was on hand, and we found out that beer and cupcakes are pretty good too.

Halifax, CAN: Go ahead and Bite Me