By Aaron Short | The Brooklyn Paper

Getting to Philadelphia from Brooklyn only takes minutes thanks to a new food truck serving the so-called sixth borough’s most famous local specialty.

The City of Brotherly Love is only 100 miles away, but authentic Philly-style sandwiches have been hard to find in Brooklyn since 2008, when Prospect Heights’s High Stakes Cheesesteaks closed.

“We didn’t want to be everything to everybody — people should want to come for one thing,” said Drew, who modeled the franchise after the world-famous South Philly cheesesteak joint Pat’s King of Steaks. “If you want a salad, you don’t want to come here.”

The recipe is simple: grill thinly-shaved premium loin tail beef from America’s heartland with onions, lightly toast a 10-inch loaf from Philly breadmakers Amoroso’s Baking, and put it all together with some provolone or American cheese, or a dollop of Pennsylvania’s favorite dairy product, Cheez Whiz.

They’re already making Keystone State transplants yearn for home — serving up 200 cheesesteaks on Saturday and running out of meat by 11 pm.

A half-sandwich costs $5.50 while a full sandwich, roughly a half-pound of beef, sets diners back $8.50 — a price affordable to Rocky Balboa back when he was just a hardscrabble pugilist from Philly’s Kensington neighborhood.

“They’re meaty steaks,” said Drew. “I don’t think anybody has eaten two yet.” 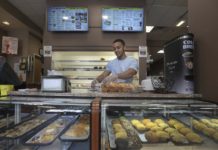 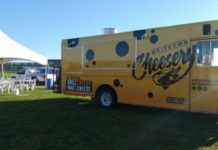 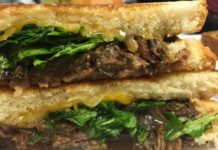