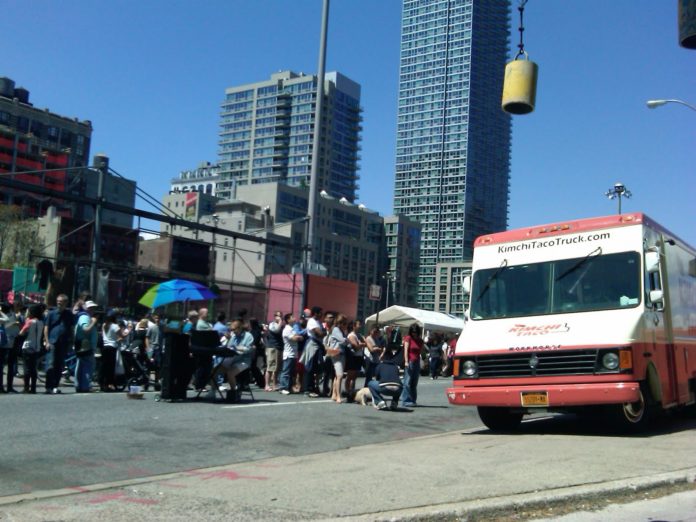 Has the food truck phenomenon finally rolled in to Charlotte? You can check it out tonight at 5, in the parking lot on 7th Street across from Seventh Street Station, at the Chow Down Uptown Food Truck Rally. At least eight trucks are signed up to be there, but that may grow.

I wish I could be there, but I already had a tight schedule between the end of the work day and the start of the Neko Case concert in Knight Theatre. I’ve also had my share of food truck experiences lately.

Last year, when I was in New York for the James Beard Awards in May, I had gotten a bead on a food truck rally at the Hell’s Kitchen Flea Market. Fellow food soldier Andrea Weigl and I set out nice and early. But the Web site was unclear about the actual address – happens a lot in N.Y. social media, I’ve learned. By the time we found the right spot, the rally was well underway and the lines were stretching roughly from the Hudson River to Long Island. We stood in line for 40 minutes just for the Big Gay Ice Cream Truck. It was worth the wait for a Salty Pimp (chocolate and caramel and soft-serve ice cream sprinkled with sea salt) and a Bea Arthur (hard to explain but it involves very tall soft-serve and crushed vanilla wafers). But that was all we had time to try.

This year, I was in the same place at about the same time. And now the Hell’s Kitchen Food Truck Rally is happening every other Sunday through the summer. This time, fellow food soldier Debbie Moose and I set out early with very good directions. We were almost too early: The trucks were still pulling in. But that meant we only had short waits to gather a full picnic.

Debbie grabbed a spot in the line at Gorilla Cheese and I fanned out to hunt and gather from the trucks that didn’t have lines. We met up at the curb and sat in the shade, spreading out a picnic while a street musician with a portable keyboard played jazz. New York food came to find us for a change. We had pork and chive dumplings, carrot cake, grilled muenster with proscuitto on challah, a big lobster roll ($15, but big enough to split), and spicy ginger slushies. My favorite thing was the deep-fried mac and cheese bites, which were crunchy and hot and tasted particularly good with a sweet onion dipping sauce.

If you’re in New York this summer and you’re interested in something different, check www.hellskitchenfleamarket.com to see if it’s a food truck Sunday. Don’t get confused by the addresses – you want the flea market at 39th and 9th Avenue. And you need to get there by 10:30 if you want to miss the worst of the lines.

And if you’re at the Charlotte food truck rally tonight, drop me a line, kpurvis@charlotteobserver.com, and let me know how it went. If you send me a jpeg, I’ll try to post it here next week. Have fun, kids.