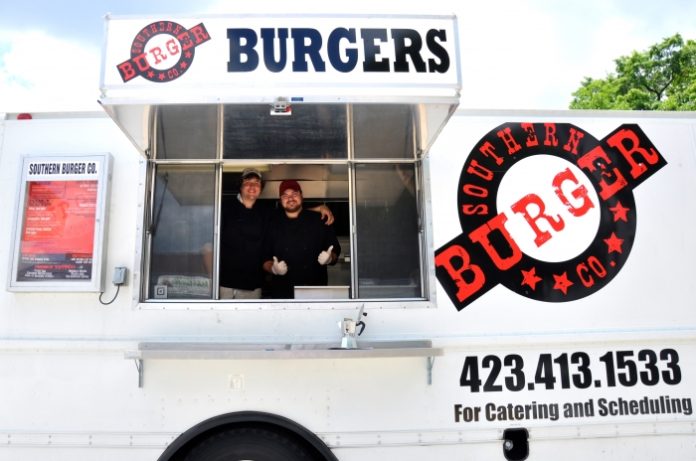 Southern Burger Company of Chattanooga, has been nominated for this year’s nationwide “Great Food Truck Race” Sweepstakes with winners to be named America’s favorite food truck.

“We’ve beat expectations from day one because Chattanoogans have really welcomed us. Now we’re ready to represent them on the national stage,” he said.

In late 2010, Mr. Siler turned a Fed-Ex truck into a commercial kitchen stocked daily with homemade sourdough buns and the ingredients to turn the generic burger into a delicious, flavorful entrée.

Southern Burger Company boasts a “fresh take on a favorite meal.” Making gourmet burgers from a mobile restaurant-on-wheels is what they do, and they lead the growing industry in Chattanooga.

In less than six months, his idea has become a highly-anticipated lunch hot spot in downtown Chattanooga. Selling over 100 burgers a day, moving to 10-12 locations a week, and catering private events keeps the truck busy.

“It’s all about location, and demand for one of our stops has only increased” Mr. Siler said.

“We may be the new kids on the block, but we want to win. The South is a great place to live, and we’re out to prove that Southern Burger Co. is one more reason people should start here. Chattanoogans: We need your help,” he said.

The truck receiving the most votes will be named America’s Favorite and will receive $10,000, along with an opportunity to appear on season three of The Great Food Truck Race. Voting is Aug. 14-Sept. 12.