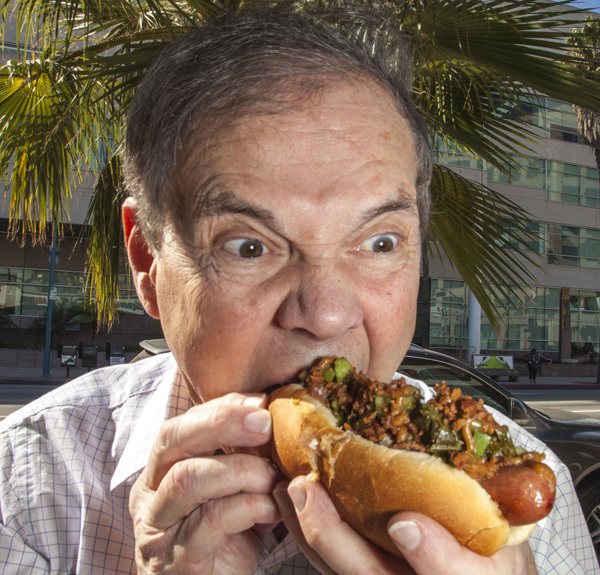 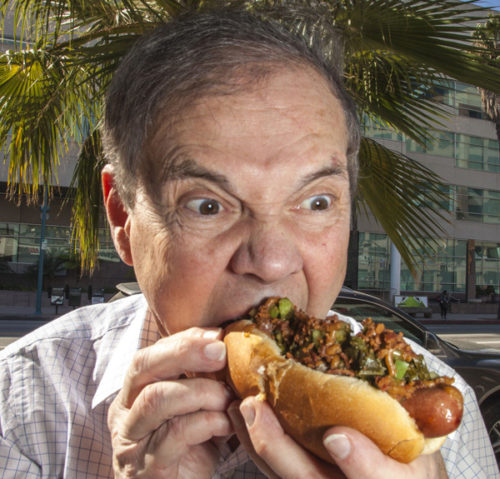 From politics and processing to pop culture appeal, Bruce Kraig has made it his mission to know everything about hot dogs.

Health food this is not. But the all-American allure of the hot dog endures.

Toppings matter, of course, as do regional flavors. Kraig, a resident of Oak Park, Ill., and professor emeritus at Roosevelt University in Chicago, knows ketchup has its fans. But you’ll never catch this hot dog historian putting it on his dog.

Digging into the love and lore behind an unassuming ballpark staple, they offer a guided tour of immigrant culture, gastronomic history and hot doggeries coast to coast.

On Aug. 11, Carroll and Kraig will be part of the first Chicago Hot Dog Fest from 11 a.m. to 3 p.m. at theChicago History Museum. Admission is free.

Due out in September, Kraig’s next book is “Street Food Around the World: An Encyclopedia of Food and Culture,” a textbook written with Colleen Taylor Sen.

Q. How did your fascination with culinary history evolve?

A. My field is medieval economic history and archaeology; that’s what my doctorate is in. You wonder how you get from that to American hot dogs? I’ve always been interested in food and worked in restaurants when I was a kid. I began thinking a lot about what peasants ate in the Middle Ages. I know a lot about medieval agriculture, that sort of thing, and it got me thinking.

I was doing a book on pre-history, and I was in Mexico working. I used to eat at a little restaurant in the middle of Mexico City run by an eccentric American woman. Out of the blue I said to her, ‘You ever thought about writing down your recipes? If I get a publisher, you want to do it?’ I wrote a cookbook by accident. I didn’t know what I was doing…. I got into food history and began teaching food history.

Q. What explains the enduring appeal of hot dogs?

People have often asked me, “Why not hamburgers?” I don’t think hamburgers have the same cachet as hot dogs. Hot dogs are the first prepackaged meat product. They’re convenient to handle, cheap to sell.

Q. Is there one All-American classic?

A. I would say a plain hot dog with mustard on it. Probably that’s the one most commonly eaten, certainly by children. That may well not be with mustard, but ketchup. I am in Chicago, and so I say that with a little bit of retching…. If you look at iconography of hot dogs around the country, it is often just a hot dog with a squiggle of mustard.

Q. When did we start serving hot dogs?

A. Sausages are brought by German immigrants after 1848. The first evidence we have from newspapers is the 1870s, when it appears on buns at Coney Island.

The first evidence we have of specially made buns is the 1870s in Brooklyn, but it is possible it was done elsewhere in the country. Then it becomes street food. They’re not called hot dogs yet, but they’re different kinds of German sausages, frankfurters, wieners and Thuringers.

Q. Do hot dogs have a social status?

A. They transcend class. If at a public event like a baseball game where all the fans are together, we’re eating the same thing, this cheap meat. That’s the social cement. That’s why hot dogs are classless.

Let’s say you go to Pink’s in Los Angeles. Lines (are) out the door all the time. You’ll see movie stars getting out of their cars. If you go to a hot dog stand like Papaya King in New York, you see guys in business suits and workmen in overalls all at the same place eating together.

Q. You talked to a few sausage-makers in Wisconsin. How does this area shake out when it comes to hot dog heritage?

A. Well, it is of course, brat country. Everybody knows this. Hot dogs are major manufactures there, particularly Klement’s, which does a lot of private label. And you can’t beat the sausage races! Klement’s is a kind of medium-level artisanal maker, because they do private label and they do it in batches. If you want a hot dog, they’ll make it to your specifications. They do a Chicago style, quite good.

Usinger’s is one of the best in the country, and their techniques are really Old World. When I do comparisons of hot dogs at talks, Usinger always comes out No. 1….

In the book, I mention Gilbert’s Craft Sausages (of Sheboygan), a smaller newer one. They’re one of the many up-and-coming new sausage people. There are a whole bunch springing up around the country.

Oscar Mayer is in Madison. They’re making an all-natural upscale hot dog, called their premium label. If you look at the label, it has things like celery juice and beet juice, all beef, no artificial flavoring; they see a growing market.

A. No! Never. That’s sort of a schtick that Chicagoans do, and it didn’t come around until the ’70s. Most adults don’t put ketchup on them.

Q. You were a part of judging for National Mustard Day at the Mustard Museum in Middleton. How many mustards do you have at home?

A. I have about six at home, generally. My favorite mustard is a Dusseldorf, a brown German mustard, which is also popular in Cleveland. I like it better for hot dogs than Dijon. Most hot dogs fans choose yellow mustard, which is quite good, but I happen to like Dusseldorf.

A. Foie gras on a hot dog. The weirdest are (from) Japadog. It is a stand opened by a Japanese guy in Vancouver; they now have one in New York. He puts on bonito, fish flakes and teriyaki-laced cabbage and other such concoctions, which I think just don’t work. I think they’re awful, but they’re popular and they sell a lot of them.

Q. Where are the best hot dog joints in the Midwest?

A. Chicago is the center, I have to say, because of all the stands we have here. Many of the photographs in the book are from Chicago because it is so highly decorated and shows the story.

We photographed the hot dog stands on Old World 3rd Street (in Milwaukee), the guys who come out and serve the bars at night. They need to be patronized, because they’re doing a great thing.

You want upscale hot dogs, the place to go is Hot Doug’s on N. California in Chicago. If you go on a weekend, there will be lines. He has duck fat fries, which are to die for. Most of what he sells are Chicago dogs, but he has duck, pheasant, antelope and other variety-meat dogs. It is just an experience.

My favorite just plain Chicago hot dog place? The best is called Murphy’s, in my opinion, on Belmont and Damen. For an earlier Chicago style, before it was loaded up, go to Gene & Jude’s at River Road and Belmont. It is the highest grossing stand in Chicago, on the way to O’Hare (International Airport).

Q. Why do we think of them as quintessentially American?

A. Hot dogs are found all over the world, but even in Asia they call them hot dogs.

Houston, TX: We Ate and Ranked Everything at Pinoy Street Food