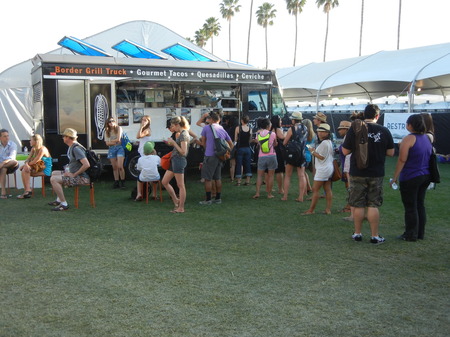 Someone asked me what kind of perks there were to the VIP pass (it’s where the media tent is) and, like a Rorschach test, the first thing I said was “restrooms” – seriously, they’re air-conditioned, and flush and have sinks and soap.

But it got me thinking about the other “perks”.

There’s an air-conditioned bar and a literal powder-room to freshen one’s sweat-ridden makeup, outlets to charge one’s phone if you can find them (word to next year’s VIPers, the press don’t have extra chargers and don’t have a lot of space on their already packed outlets) and a few different dining options including this year’s addition of food trucks.

Timothy Guy already told you about the red velvet ice cream sandwich cookie creations from CoolHaus. I gave the Border Grill truck a try. Being an Inlander, we don’t have food trucks on every corner (health regulations, bah), but $10 for three carne asada tacos, really?

The Kogi truck, the founding father, if you will, of the food truck craze parked in VIP Saturday.