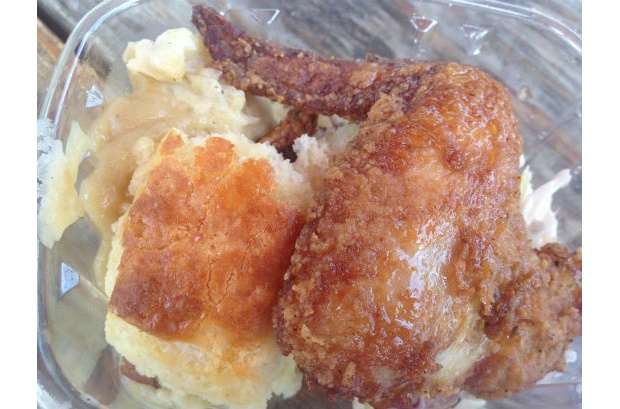 If last summer was the summer of the food truck, the moment everyone and their mother seemed to be retrofitting delivery vans with deep fryers and cooktops to park and feed the streets of Columbus, this is the summer for trucks to mature, for a hierarchy to set in. We’ve got more than 100 rolling around at this point. It’s time to make some distinctions in quality.

And who better to help the hungry do so than Bethia Woolf and Andy Dehus, the indefatigable tour guides behind Columbus Food Adventures? Their recently debuted food truck tour is an ideal primer for those ready to see what fine truck dining can be.

Each stop was meant to be emblematic of a different kind of food trucking: roving ethnic eats filtered through a chef-school prism (Ajumama), the stationary and single-minded (Ray Ray’s), the lowbrow turned gourmet (Mya’s Fried Chicken), the ethnic-eats-in-the-middle-of-a-North-Side-parking-lot (Aromaku and Taco Nazo, in a lot wedged between a Walgreen’s and an empty building on 161) and late-night eats suited to sopping up excess alcohol (Tokyo Go Go.)

The lineup for this tour is flexible — your results may vary based on the trucks’ schedules. For instance, we had to drop a planned stop at That Food Truck due to their scheduled engagement at the Columbus Arts Festival.

Over three hours, we ate a lot — enough to render an experienced eater in need of a nap. Truck food can be a lot of things, but on this tour, there were certainties: the food would not be vegetarian-friendly, and it would not be light. Pajeon pancakes and a hush-puppified take on bibimbap opened the tour at Ajumama, followed by brisket, ribs, a wing and collard greens at Ray Ray’s.

We washed that down with Mya’s buttermilk-brined fried chicken, a biscuit, potatoes and coleslaw, then moved on to a double-header with Aromaku’s coconut-milk beef stew and flatbread plus a tamale and guacamole from the adjacent Taco Nazo.

By the time we hit Tokyo GoGo at Brothers Drake, there were audible moans of satiety from my tour companions as we continued to gorge on bacon-wrapped skewers of quail eggs and tomatoes.

In the past year, I’ve dined at a lot of food trucks. (Just look at my clothes, all stained to oblivion from truck-food shrapnel because I’ve tried to eat while standing.) And I agree with Bethia and Andy — the trucks they’ve selected are a part of that top tier of street eating. Your experience there is only enhanced by being shown around by two knowledgeable guides, able to give you context for street food’s place in the city and the country.

Whether you’ve avoided food trucks completely or are looking to see the places truck food has been escalated to the level of serious dining, consider this tour. The next outing is Saturday. (And, for your appetite’s sake, skip lunch.)