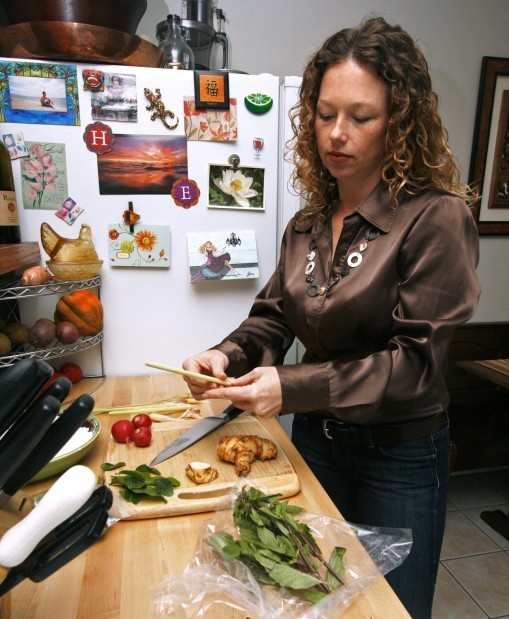 When Lompoc resident Hether Briggs describes how her childhood included hunting and butchering game, and helping to cook, can and dry fresh, seasonal fruits and vegetables, one might think she’s joking. But she’s not.

Briggs, now 33, will soon morph her life’s culinary skills into a new career, as chef de cuisine and owner of “Eat This! Mobile. Global. Cuisine.”

The name says it all: Briggs will use a mobile kitchen to cook and serve locally grown food. Why mobile? Because she plans to cater to visitors to the Lompoc Wine Ghetto, other wineries throughout Santa Barbara County and other regional businesses, as well.

She has a soft spot for the culinary needs of the Wine Ghetto, in particular, because she spent eight years working Saturdays for Palmina Wines and watched as the industrial park blossomed from two or three tasting rooms to the more than 12 it now boasts, with a few more production facilities and tasting rooms rumored to be in the works.

Raised by her grandparents in Anderson, outside Mt. Shasta, Briggs looks back on her early years as “sort of where it all began.”

Describing herself as “the kind of

4-year-old who would try to order filet mignon and lobster with drawn butter” while she and her grandparents were dining out, Briggs said she never ate fried or fast foods.

Today, years after she left Northern California for the Central Coast and graduated from UCSB with a degree in English literature, Briggs, who has “always had, like,

10 jobs at once,” is prepared to use her experience in wine, culinary, hospitality, nonprofit, marketing and sales careers to fruition with her new endeavor.

She has worked as a sous chef, private chef, wait person, at Palmina Wines, and doing pouring and event coordination for other wineries, as well.

Most recently, Briggs worked for more than three years as director of a health-based nonprofit organization in Santa Barbara, “living the corporate lifestyle, doing the five- and six-day commute” from the southside home she shares with her husband, Errin, a Santa Barbara County planner.

One Monday in August, the organization downsized, eliminating Briggs’ position. While she spent “about a day looking for a quote, unquote real job,” Briggs quickly decided to follow her culinary passion — and the advice of several of her “best girlfriends” — and began to research the concept of a “mobile bistro,” an idea she’d tossed around in her head for years.

Online, she cast a big net, trolling for similar businesses in Los Angeles, Chicago and London, she said, and found none. Today, “Eat This!” is licensed, her “rig” is in the hands of the Santa Barbara architectural firm On Design, and she’s targeting mid-spring for her debut.

What makes “Eat This” especially unique is Briggs’ desire to launch and run it as a green business. From the tiny kitchen, complete with awning and seating counter, which will be fashioned from recycled steel and reclaimed hardware, to the “environmentally conscious” Verterra serving plates crafted from palm leaves retrieved from the ground rather than harvested, Briggs wants her efforts to have a minimal impact on the global environment.

Her Verterra plate ware is 100 percent compostable within three months, yet able to withstand a hot oven and hold hot liquids, she said. Utensils and toothpicks can be composted, as well, and Briggs’ menus and invitations are printed on recycled paper containing flower seeds, and “can be planted right in your backyard,” she said.

“My business philosophy is to source food locally, since I am close to all the CSAs (Community Supported Agriculture organizations) in our county,” she said. “I am basing my menus on the CSAs’ produce, as well as the fish and farmers markets.”

Lompoc and the greater Santa Ynez Valley will be Briggs’ first choice for ingredients, followed by, in order: Northern Santa Barbara County, the county as a whole, Southern California and the West Coast, she said.

“Will I use New Zealand mussels? Probably not,” when local shellfish is so available, she said. “I’ll be sourcing locally, eating organically and eating seasonally with regional cuisine from all over the world.”