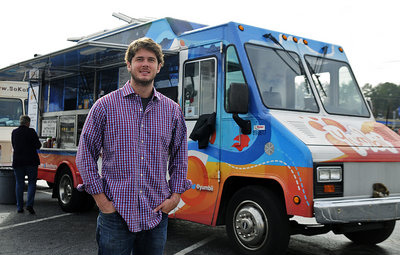 DeKalb County residents on the hunt for a bite to eat outside of the norm can now find Atlanta’s Yumbii food truck parked in a neighborhood near them.

Yumbii, tagged as Atlanta’s first food truck with an offering of “far out food,” recently expanded to DeKalb County. The food truck was founded in 2010 and has been operating in Fulton and Cobb counties.

“I figured Asian and Mexican would be a good concept,” said owner Carson Young.

He said he enjoys both types of foods and decided to combine the tastes. Young wanted to bring food trucks to Atlanta after spending time in Los Angeles and seeing an abundance of food trucks operating there. He added Atlanta is such a large market and with a food truck, he could bring his menu offerings to many locations.

On Friday, Yumbii was one of four food trucks serving lunch and snacks on Peachtree Industrial Boulevard in Chamblee, west of North Peachtree Road. Since expanding to the county in October, Young said the experience has been good.

However, the process to expand his businesses was not simple, he said.

“DeKalb is harder to get permits,” he explained. “They have a very strict permitting process.”

Young is a member of the Atlanta Street Food Coalition, a trade association that supports the efforts of street food vendors in metro Atlanta, and said he worked with the coalition in the process of expanding his operations to DeKalb.

The Yumbii owner added he is always on the look-out for good places to park his two trucks and serve.

“We want as many locations as possible,” he said.

“I think Dunwoody’s a good market.”

Patrons can regularly find the Yumbii truck Mondays in the Perimeter Mall area in Dunwoody for lunch and Fridays for lunch in Chamblee.