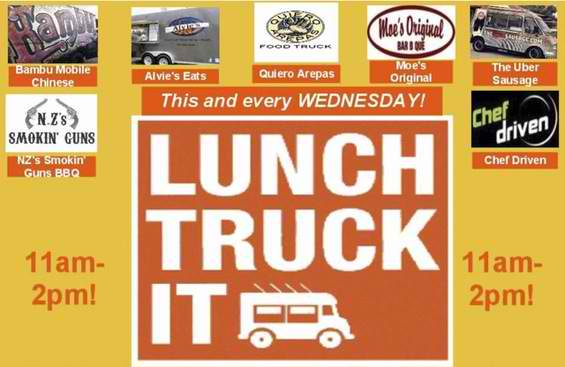 While the Justice League of Street Food, Denver’s original coalition of food trucks, held its last bash of the year (and possibly ever) last weekend, and Civic Center Eats, the city’s summer gathering of food trucks at Civic Enter Park, has gone dormant until next year, another gang of food truck slingers is gearing up to hustle grub from the asphalt.

Tomorrow, seven trucks serving meals on wheels — Bambu Mobile Chinese, Alvie’s Eats, Quiero Arepas, Moe’s Original Barbecue, the Uber Sausage, N.Z’s Smokin’ Guns and Chef Driven — will park curbside from 11 a.m. to 2 p.m. in a parking lot on the southwest corner of Fifth and Santa Fe, near Denver Urban Homesteading, the year-round, urban-fresh, Colorado-centric market at 475 Santa Fe Drive. “This is a project I put together with the help of Igor and Becky, who run Quiero Arepas, a vendor at our market,” says James Bertini, who owns Denver Urban Homesteading — and the nearby parking lot — with his wife, Irina.

“We were at Civic Center Park, and I started asking the different trucks about whether or not they were done for the summer — we knew we weren’t — and everyone was super-responsive about wanting to continue the food truck community,” explains Becky, adding that the fleet of trucks will change week to week (that’s good news for those of you who have been clamoring for more variety).

“We really want to keep it fresh, and we all have other time commitments, so you won’t see the same players every week,” notes Becky. And, in fact, you might see more than just food trucks. “I’ve extended an invitation to food carts, trailers, loncheros — to anyone that has insurance, a license and is legal — to come on down.”

The trucks — and whoever else wants to participate — will be on hand to feed people every Wednesday (weather permitting). “As long as we’re successful, we’ll continue doing this indefinitely,” says Bertini.