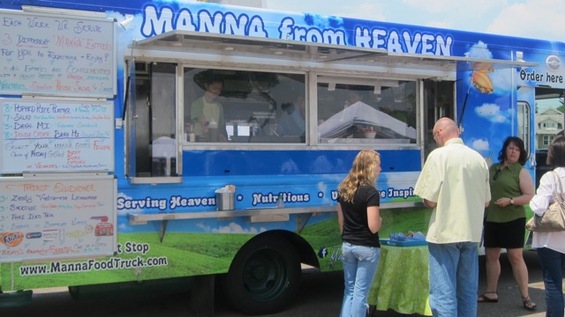 There’s a new fleet of street-food slingers in town, several of which made their debut on Saturday during Denver’s first Food Truck Showcase, a mob squad of mobile food vendors that took over the parking lot of the Festival Plaza at Mile High. Some of the new tucks — Route 40 Argentinian Grille, for example — that were scheduled to post up, didn’t, but there was certainly no shortage of grub, and while there were no beer vendors on site, the liquor store that resides in the strip mall sells plenty of brews (and booze) — and happily hands out brown paper bags to conceal it.

For those of you who regularly whine about the long lines at the Justice League of Street Food bashes, there was no lines here — none — which made it all too easy to eat like heathens, which is exactly what we did, snapping photos along the way of the new carts, trailers, trucks (and one canopy) — and the foodstuffs they dished out.

​Manna from Heaven, a Vietnamese food truck, made its debut this weekend — and I nearly wept with joy after sinking my teeth into the bánh mì, available with grilled chicken, pork or beef. Gobsmacked with fresh vegetables and herbs, spicy with Sriracha sauce and smeared with a cucumber relish, it was, in a word, stellar.

​Chef Driven, a new truck from Richie Stothard, who earned his culinary degree at Le Cordon Bleu, got its first taste of Denver’s street-food movement at this weekend’s food truck showcase. Stothard works closely with local purveyors and farmers, getting his corn tortillas form Raquilita’s Homemade Tortillas and his organic Cherries from Red Mountain Ranch.

​Phil Willoz, who works in the kitchen of Madison Street, introduced Taco Bar, his new venture that’s neither a cart nor a truck, but a simple canopy from under which he slaps tortillas with everything from carnitas and pulled chicken to duck confit and braised short ribs, accessorizing them with excellent sauces and salsas.

​One of Denver’s largest caterers, Epicurean Catering, has also hit the streets, serving blistered pizzas, perfumed with char, from a wood-fired oven. The sauce was slightly flat, but overall, the pizza was impressive.

​Also new to the truck beat is Alvie’s Eats, a hitch-and-go trailer from Alvie Claborn and Regan Jolie, whose board includes, among other things, Indian fry bread, sliders and Asian nachos.

​The ice cream at Coaches Scoops, which come in sizes appropriately labeled “Slam Dunk,” “Three Pointer” and “Free Throw,” are all scratch-made, and include flavors like red velvet, apple pie a la mode,
chai tea latte and maple bacon.

​A huge scoop of cherry Italian ice from Coaches Scoop — and a kid (my kid) who was more than thrilled at the prospect of having it all to himself.

​Sooner or later, you knew that an ice cream truck, mirrored to resemble a cow, would hit the pavement. On Saturday it mooooved the crowds with ice cream and ice cream sandwiches and cakes.

​And because everyone loves sugar highs, the Sweet Little Bakery was there, too.