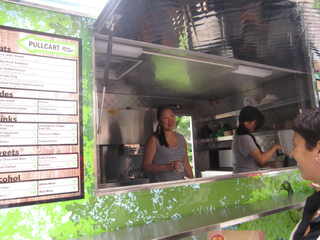 MANHATTAN — Park-goers can now enjoy a pulled pork sandwich and a glass of wine overlooking one of Central Park’s most treasured locales.

Pullcart, a food truck that will create an al-fresco dining space by the team behind Fatty Crab and Fatty ‘Cue — which has restaurants in the West Village and Upper West Side — opened Saturday at Bethesda Terrace in the center of Central Park, according to a spokeswoman for the restaurant group.

Visitors will be able to enjoy the food truck’s Malaysian-inspired offerings on the go or at one of the truck’s 12 outdoor dining tables. They’ll even be able to wash it down with wine and beer.

Just last month, Pera’s Turkish Taco truck, which parks in Central Park outside Tavern on the Green, became the city’s first licensed food truck to sell booze — a move that has concerned some members of community boards around the park. 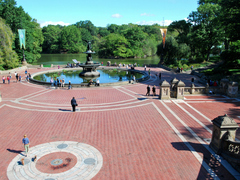 Bethesda Terrace in Central Park is now home to a food truck from the team behind Fatty Crab. (Flickr/rocketlass)

“What better venue to stop by for a well-deserved drink and light bite to round out a long day’s work, or to enjoy a weekend day in the park,” Rick Camac, CEO of Fatty Crew Hospitality, said in a statement.

“Pullcart will provide visitors to Bethesda Terrace with tasty treats while they enjoy the remarkable surroundings and tranquil sounds of the nearby fountain,” Parks Commissioner Adrian Benepe said in a statement.

The Parks Department recently cracked down on the musicians at Bethesda Terrace who have long been drawn by the great acoustics of the spot’s arcade.

Pullcart has signed on for a 6-year stay at Bethesda Terrace, with daily open hours from 11 a.m. to 8 p.m., weather permitting.