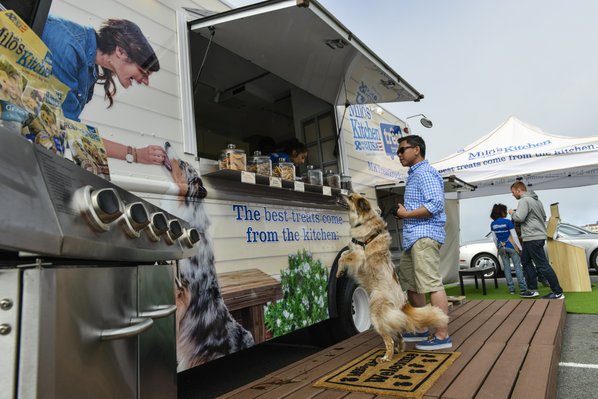 At the upscale Citron in Palm Springs, Calif., a human guest might dine on calamari, chicken and Chardonnay.

But as The Wall Street Journal reported in July 2012, there might be another guest enjoying the high life there on a lower level. Some restaurants are now offering patio dining for dogs with menus that include entrees from from lamb stir fry to meat loaf to scrambled eggs with bacon bits.

Americans forked out more than $53 billion on pets in 2012, an all-time high and a 5 percent jump from 2011, according to the America Pet Products Association.

Retailers have gone to the extreme, USA Today reported in 2013, creating lines of cologne like the Sexy Beast Dog Perfume for $65, Martha Stewart-brand dog beds for $50 and BK Atelier’s luxury poop-bag holder for $39.99.

“It’s not trying to profit off the pets,” Dominic Mercurio, owner of Cafe Fina in Monterey, Calif., told The Wall Street Journal about his dogs-only menu. “It’s to draw in the customers.” 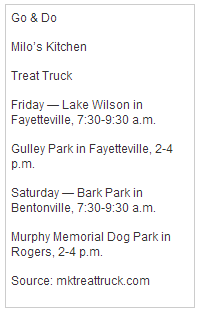 Now, a San Francisco-based company that makes dog treats is crisscrossing the country using a similar lure. The Milo’s Kitchen Treat Truck is using free samples to lure in humans who might spend money pampering their pooches. The Treat Truck, designed to look like one of the mobile vending trucks so popular nowadays, is stopping in Northwest Arkansas this weekend.

Sonya Thomas, a senior brand manager for the company founded in 2011, said marketers “really wanted to get out and meet people and get a chance to talk to pet parents and share our treats with them. We thought the best way to do that is in person. And we saw the huge craze for food trucks and wondered why not take advantage of it?

“So we’ve been traveling all over the nation — and it’s truly been an experience! The treat truck has a doggie window, so they can put their paws up and put in their own order,” she said. “Grilled burger bites or chicken jerky, to go in a doggie bag or the dog can eat it right there.”

The samples are free. But the idea is, of course, to sell consumers on new lines of Milo’s Kitchen products, Thomas admitted. In January 2013, the company recalled its chicken jerky and chicken grillers treats because trace amounts of residual antibiotics had been found in several lots sourced from China.

“We’re not bringing the products with ingredients sourced from China back,” Geoff Tanner, vice president of pet snacks for Milo’s Kitchen, told DVM360 Magazine in February 2014. “Instead, the company decided to reformulate the products and source 100 percent of its meat from the United States, exiting China completely. The brand Milo’s Kitchen is a brand that’s grounded in a philosophy that the dog is an equal member of the family and deserves ingredients that are as good as our own food.”

However, many veterinarians, the magazine reported, don’t think snacks of any kind are necessary.

“I am a huge fan of treats, which are things that bring pets joy,” C. A. Tony Buffington, DVM, MS, PhD, told the magazine. “I am not a fan of snacks because it risks weight gain and teaches pets to beg.”

But the food truck experience can be a lot of fun, Thomas promised, marketing aside. Families of humans and pets can take a free family photo in a professional photo booth, socialize in a backyard-style doggie lounge and take a walk break with dog beds, drinking bowls and puppy toys.

Ironically, Thomas does not have a dog.