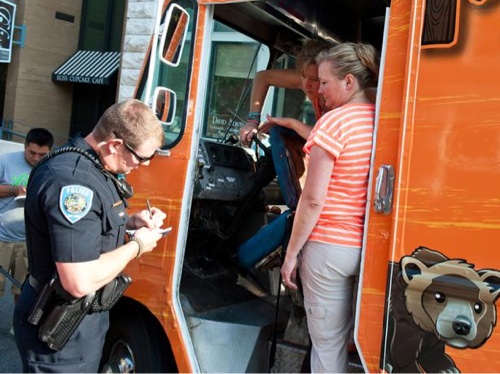 Five teams remained as the food trucks pulled into Fayetteville, Arkansas. The teams of The Great Food Truck Race season 3 met Tyler at the U of A Razorback Stadium and were instructed to tailor their menus to the college crowd. Tyler gave each team $300 seed money and warned there were epic surprises in store.

The Challenge
Momma’s, Nonna’s and Seoul Sausage headed to Dickson Street which was considered the town’s hot spot, but Pop-a-Waffle heard that area wouldn’t be busy till later so they set up shop in the grocery store parking lot. Meanwhile, Coast of Atlanta opened their doors in front of a bar hoping to attract the drunk crowd looking for munchies.

Seoul Sausage started serving their fried balls right off the bat, while Momma’s Grizzly realized they forgot to buy tortillas, which is kind of needed for tacos. They watched as Seoul Sausage dealt with long lines, while they scrambled to open their doors.

Truck Stop
The Great Food Truck Race host Tyler ordered the teams to shut down their trucks for the day because they would be getting up early for a breakfast challenge using a secret ingredient. Pop-A-Waffle was excited by the breakfast aspect for obvious reasons, while Nonna’s was unhappy to shut down already since they hadn’t made a single sale yet.

The next day, Tyler called the teams to tell them they had to use the college food staple of Pop Tarts, which delighted Pop-A-Waffle. The teams opened their trucks to find the processed breakfast treat already stocked. They also learned they would be judged by accomplished teen chef Jeremy Salamon.

Nonna’s decided to partner with Seoul Sausage at a farmer’s market. While Pop-A-Waffle joined them, Coast of Atlanta learned there was no more room, so they decided to set up on a nearby street. Momma’s followed suit, but even though all the teams ended up in the same area, Momma’s was the only team to take out a street lamp while parking. The bill for the post would come out of their earnings, putting them further behind than ever before.

Nonna’s made vanilla battered French toast topped with Pop Tarts and a mascarpone cream. Pop-A-Waffle put the Tarts directly into their batter, while Coast of Atlanta made a Pop Tart hash, which seemed to fly out the window. Momma’s toasted their tarts and made Napoleons out of them, as Seoul Sausage made a French toast encrusted sandwich with cream cheese, friend egg and bacon. After Jeremy sampled all the breakfast specials, he awarded the $750 prize to Nonna’s Kitchenette.

Speed Bump
Tyler shut the trucks down again because they would be going from the breakfast shift to the graveyard shift starting at 1:00 AM. All the teams drove to Dickson to hit up the bar crowd. Momma’s and Nonna’s both decided to park on the same corner, sparking more animosity between the teams. As Coast of Atlanta dashed off to the store for more supplies, Pop-A-Waffle and Seoul Sausage started selling to long lines. Once Coast of Atlanta regrouped, they dropped their prices and made their fish baskets smaller in order to make the most money. After the bars closed and the kids went home, the streets emptied out. Coast of Atlanta were tipped off about another Farmer’s Market and made their way over for the final couple of hours. Nonna’s found out about it as well, while Pop-A-Waffle and Seoul Sausage teamed up on Dickson Street.

Elimination
Tyler announced that the winning team of the Fayetteville challenge was Nonna’s Kitchenette. Seoul Sausage, who came in second, was finally dethroned. The top two teams were only separated by $98, but don’t forget, Nonna’s received that bonus $750. Pop-A-Waffle came in third, leaving Momma’s and Coast of Atlanta in the bottom two. Momma’s would have been in the clear, but they had to pay for the light post. Fortunately, the mayor agreed to treat it as an insurance matter, allowing Momma’s to just pay the $250 deductable instead of the full $1900. Tyler lowered the boom for Coast of Atlanta that even with the $250 setback, Momma’s was safe. That meant Coast of Atlanta was the team who went home.

And then there were four. The final four is headed to Nashville, Tennessee next week. Tune in to find out who survives in the music city and who falls short on the The Food Network reality show.