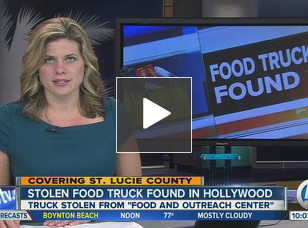 FORT PIERCE, Fla. — A food-laden truck stolen from the nonprofit Food and Outreach Center overnight Sunday has been found in Hollywood, minus the food.

And it was damaged.

She hadn’t expected the box truck would be found. “This is a lot more drama than we are used to,” she said Friday.

A center representative will go to south Florida to inspect the truck and see if it can be driven. It has been carrying a load of $10,000 in non-perishable foods, including cereal, granola bars, Hamburger Helper and canned goods.

A security company is offering to upgrade the center’s security system at its facility in the 2500 block of Orange Avenue.

In September, two of the center’s tractor-trailer storage trucks — containing an estimated $35,000 in donated equipment — were burned, apparently by an arsonist. The fire destroyed 120 classroom desk chairs that were to be used in the center’s planned expansion of an education program for people coming off welfare, Trotter said. Also destroyed were clothing display racks.

Those trucks weren’t replaced. They were used for storage which now is inside the building.

But the food truck was used for picking up food that is given, at low cost, to about 400 people a day: teachers, retirees, families, and single-parent families

“A single parent making $44,000 a year” doesn’t have a lot of money but usually that person is ineligible for food stamps, Trotter said.