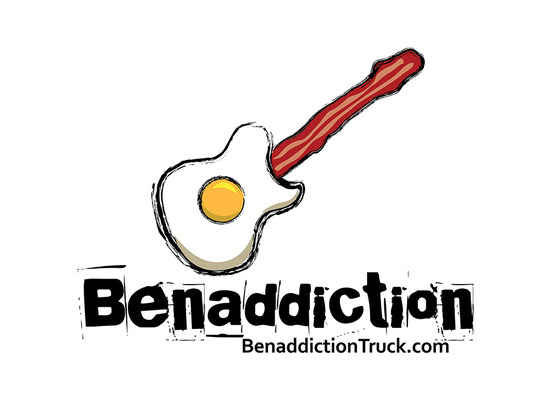 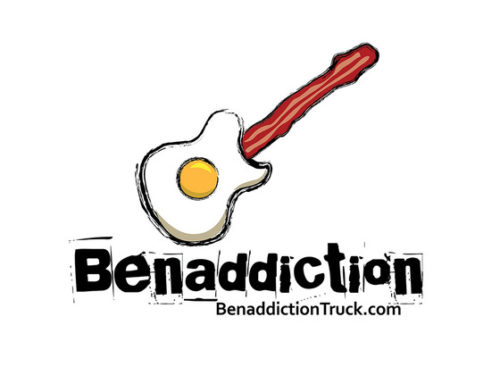 The black truck with the fried egg and bacon in the shape of a guitar logo serves breakfast food with a rock ‘n’ roll twist. Instead of French toast with a knife and a fork, there’s the portable, bite-size French toast that’s dipped in batter, then pulverized in Cinnamon Toast Crunch cereal before cooking.

It specializes in egg benedict-style sandwiches, such as “the Clapton” with its fried egg, bacon and hollandaise sauce served on a fresh-made English muffin.

Benaddiction serves lunch items, too, including the “fat-bottomed grilled cheese.” And Chef Jason Valencia is passionate about his soups, such as the smoked salmon chowder he served last week.

Benaddiction is the brainchild of James Caples, who is not a musician but gave all the menu items musical names because he really loves music.

They’re still building the truck’s schedule, but you can catch Benaddiction on Mondays from 8 to 10 a.m. at the Palazzo Apartments in the Campus Pointe development next to Fresno State; Tuesdays at the northside CartHop at Friant Road and Fresno Street; Wednesdays at Palazzo Apartments from 8 to 10 a.m. and at the State Center Consortium building on Herndon Avenue near Peach Avenue from 11 a.m. to 1 p.m.; Thursdays at CartHop on Fulton Mall from 10 a.m. to 2 p.m.; and Fridays from 8 a.m. to 2 p.m. at the Manchester Center farmers market.

Caples is the guy taking orders out front. He’s spent years working 12-hour days in restaurant management and daydreaming with his wife about one day starting a food truck.

Last year, tragedy caused them to speed up their plans. Their 3-month-old daughter, Caylie, didn’t wake up from a nap at day care. Her death, attributed to sudden infant death syndrome, inspired the couple to move up their plans and end the long workdays that kept them apart.

Grilled cheese is shaping up to be Fresno’s next big food trend, with the Grilled Chz restaurant planning three more locations next year.

Juan and Anna Ortega, who don’t own the original location but act as consultants, plan to open the next Grilled Chz in January. It will be located at the northwest corner of Shaw and West avenues, in the same building as the new Starbucks.

After promoting the concept for months, the Ortegas have signed on several investors and recently won “best in show” at the Central Valley Venture Forum, a Fresno State Lyles Center for Innovation and Entrepreneurship.

They are planning to open two more Grilled Chz locations: one near Fresno State and another in Clovis, although the sites are not yet finalized. The new restaurants will feature the same grilled cheese but will have a polished look, dropping the graffiti theme of the first restaurant.

And there’s a mobile grilled cheese cart on the way, too. The cart will allow the owners to serve sandwiches at events such as Big Hat Days and the Big Fresno Fair.

Crab Cakes Restaurant has moved across the street in Oakhurst, a change that gives a boost to the restaurant and its sister company.

The restaurant moved in October to 49271 Golden Oak Loop, adding 40% more seating and a bar. The restaurant, which serves beer and wine to diners, is still working on the liquor license that will allow it to open a full bar. The bar is scheduled to open by the end of the year, said owner Roman L. Zabicki, who also runs Yosemite Catering.

His wife, Laura Zabicki, runs Sweet Dreams Wedding Cakes and Flowers. She plans to move her growing business into a building next door to Crab Cakes.

The Zabickis combine their businesses to offer package deals for weddings that include catering, rehearsal dinners, wedding cakes and flowers.