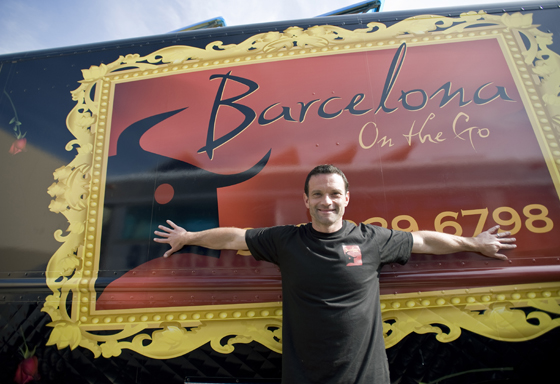 Tired of repetition? Throw out that drab homemade lunch with the bland PB&J and visit two new food trucks located in the Humanities Plaza.

Joining Juice It Up’s mobile location, Spudrunners and Barcelona OntheGo are the newest additions of great cuisine offered on campus. With both menus ranging from french fries, baked potatoes, shrimp tacos and paninis, there is something for everyone to try.

Spudrunners is based out of Irvine and was created by Chef Bob Brown. The mobile eatery came during baseball season last year. Many were enticed by its mouth-watering selection of American comfort food, and last May it was asked to stay on campus for the 2011-12 academic year.

Frank Sanchez, 21, a radio-TV-film major, couldn’t get enough of Spudrunners. “Their sun-dried tomato-basil dipping sauce is really good with the french fries. I can’t wait to go back again,” said Sanchez.

It also sells fresh-squeezed lemonade, which Victoria Ford, 20, a political science major, really enjoyed. “The blackberry lemonade is very refreshing,” she said after taking a sip from her cup.

Barcelona OntheGo’s headquarters is also in Irvine and was founded by Esteban Nocito. The truck has been around for about a year and a half, beginning as a traditional Spanish cuisine truck.

Santiago Nocito, co-owner of Barcelona OntheGo, said, “The menu has developed a lot. We moved toward popular items like tacos and french fries. We wanted to offer what people were more used to.”

During the transition of the new menu, Barcelona OntheGo’s business went through a rough time, but was able to find its niche in the food-truck community.

“We launched a second truck five weeks ago,” said Nocito. The additional truck roams Orange County while the original stays on campus with the same hours as Spudrunners. “Spudrunners asked us to join them at CSUF for a one-year contract too.”

Barcelona OntheGo’s menu is ornate with options such as USDA prime top sirloin and fries with chimichurri, roasted vegetable panini with chimichurri, shrimp tacos with chipotle and much more. They also carry desserts, which change daily for anyone with a sweet tooth to snack on.

Their fresh ingredients and elaborate menu will leave busy students and faculty with a full stomach.

Save that extra lunch money and visit Spudrunners and Barcelona OntheGo. It’s much better than the monotonous homemade sandwich.