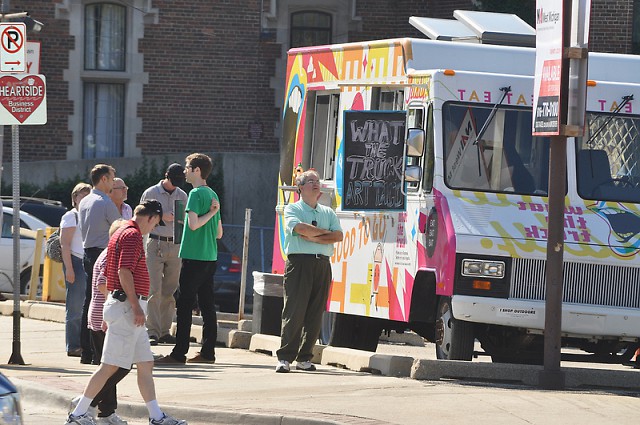 Neither side leaves satisfied as commissions try to balance concerns over food trucks in the city.

The public comments around the food truck issue didn’t carry quite the same gusto as earlier activities at the City Commission meeting, but some heavy hitters of the Grand Rapids culinary scene aired their grievances to the Commission Tuesday night.

Paul Lee, owner of the Winchester on Wealthy Street and operator of the food truck What the Truck, said he believes that the current situation doesn’t make operating a truck worthwhile.

“Around every corner it seems like we’re finding more obstacles, more restrictions being proposed,” he said. “I’m not sure how serving food out of a truck is a ‘danger to the public well being.'”

The Commission will take the public comment along with the research completed by the Planning Commission and discuss the proposed ordinance at the Committee of the Whole meeting on the 19th. As it’s currently proposed, food trucks would be allowed to set up shop on private property, but would have to receive permission from the Commission. Another sticking point for the pro-truck group is the proposed hours of operation.

“We just don’t feel that the time is right for downtown Grand Rapids right now. For those of you who will remember the many empty store fronts. There are many restaurants downtown right now, it’s still a very fragile business climate—there are some businesses that are teetering on the edge.”

Konwinski believes that the focus of the Commission should be to diversify the types of businesses in downtown, and the number of people living in the downtown core, before they allow more competition in the restaurant space.

“Bars and restaurants make up the vast majority of businesses downtown right now. We need more retail stores, we need a movie theatre, we need many, many more people to live downtown and we need more events to meet more of the need for mobile vendors,” she said.

Others who spoke at the meeting believe that policing the vendors would be an issue, and that noise issues and other problems could occur.

For their part, the planning commission said they’ve done a lot of homework looking at other cities with food trucks such as Portland, Austin and Los Angeles. Planning Commission Director Suzanne Schultz said they hope to create an ordinance that is solid from the get-go, unlike what happened in those cites where they’re now trying to undo issues they ran in to.

“We’re trying to avoid issues of late night activites that would be disrputive to residential living,” noting that each of those cities had to try to roll back late night hours after seeing the amount of disruption they caused. “Those cities also saw issues with mobile vendors being in close proximity to brick and mortar restaurants that would highly object and want to ban them.” She said they’re making their best effort to create balance for all involved.

“We’ve been trying to make a concerted effort to add residential into the downtown, so we have a population that can support transit and retail – the challenge is trying to allow for the late night activity, but also make it so it’s not disruptive to residential living.”

Shultz admits that downtown living should come with the understanding that late night crowds and activity is just part of the deal—she likened that with someone who moves into a rural area and complains about the smell from farms.

“What we’ve done with the ordinance [for hours of operation], is that it totally depends. 10 o’clock on a Sunday thru Thursday, and 11 o’clock on Friday and Saturday is going to be dependent on where you are in the city. Those hours have been set as a standard for all outdoor activites. The Planning Commission does have the ability to extend those hours if they feel like doing so won’t be an imposition for neighbors.”

Paul Lee said it’s just not an equitable proposition. “Sidewalk vendors and restaurant vendors can stay open until 2:30 in the morning. I don’t see the difference between a food truck serving that same patron that would go to a sidewalk cart or restaurant that has outdoor seating.”

Reserve, for example, has outdoor seating until 2 a.m. The Commission realized that with few neighbors around that block, the extension wouldn’t cause any strife and gave them the go-ahead. However, in the case of the Meanwhile Bar on Wealthy, their outdoor patio has residential property less than 100 feet away so allowing them to have the patio open later wouldn’t be appropriate. Shultz stresses that the hours are not set in concrete and any of the vendors can ask for a permit to operate beyond them.

Rick DeVos also spoke at the meeting and suggested that food trucks are a free enterprise issue, and that the more the city can allow the experimentation, the better off everyone will be.

“It’s called free enterprise and we should be embracing it, no matter who is on the receiving end of its disruption. Vibrancy will continue to develop as we make it easier for people to try things, to experiment with different ideas and approaches.”

DeVos believes the competition for business for the downtown brick and mortar restuarants wouldn’t be food trucks.

“It comes more from lunchtime plastic container taken from home, and the family dinner on 28th Street than from different and expanding downtown dining opportunities.”