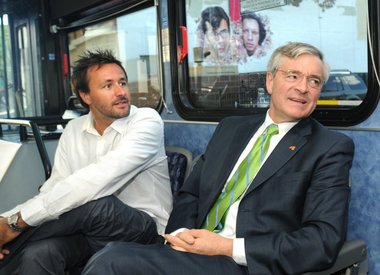 GRAND RAPIDS, MI – A zoning amendment to allow food trucks in parts of Grand Rapids, with some regulations, could come up for a City Commission vote next week. When it does, it will come with the endorsement of Rick DeVos.

DeVos spoke this week at a hearing on the amendment, which would permit food trucks and other kinds of concession stands such as wagons and trailers to operate on private property in mixed-use commercial zoning districts.

Some in the food industry have balked at the idea, saying less-costly food trucks would have an unfair advantage over brick-and-mortar restaurants with much higher overhead.

DeVos criticized that logic, calling food trucks “experimental kitchens” and saying that a meal served from a vehicle is not even “remotely comparable” to dining in a sit-down restaurant: “Isn’t it unfair competition to be able to offer diners warmth and shelter” on snowy or rainy nights, he countered.

“It’s called free enterprise and we should be embracing it no matter who is on the receiving end of its disruption,” said DeVos, founder of ArtPrize. “The more we build the experience of downtown Grand Rapids as a great place to spend time, the more everyone doing business in downtown Grand Rapids will benefit.

“Let’s get out of the way … and celebrate greater food choice in Grand Rapids.”

Under the proposal, a vacant lot that gets a city permit could host multiple food trucks for up to 200 days per year. Hours of operation could go no later than 10 p.m. Sunday through Thursday or 11 p.m. Friday and Saturday, unless Grand Rapids Planning Commission approves a different schedule.

DeVos said that “as proposed the proposal probably does not go far enough” in accommodating food trucks. Here are what some other stakeholders had to say at this week’s hearing: