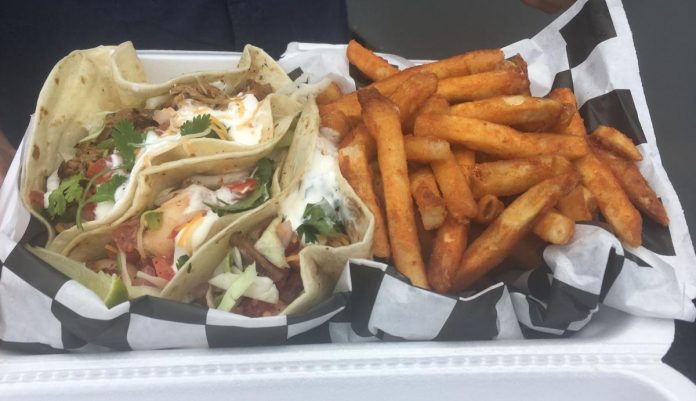 By Matthew Korfhage  |  The Virginian – Pilot

At the far end of the Sam’s Club parking lot in Chesapeake, the cars just kept on coming. It was Taco Tuesday, and chef LeeAndra “Chef Dro” Epps was serving oxtails.

She’d opened at 5 p.m., a little later than usual because of torrential rains that afternoon. But by 5:01, she said, her regulars had started lining up for her steak and shrimp quesadillas, carnitas-laden tacos and Mexican street corn — plus little Hennessy-infused pound cakes she served off-menu.

Though food trucks have been a familiar site in Hampton Roads for most of the past decade, this was something a little different. 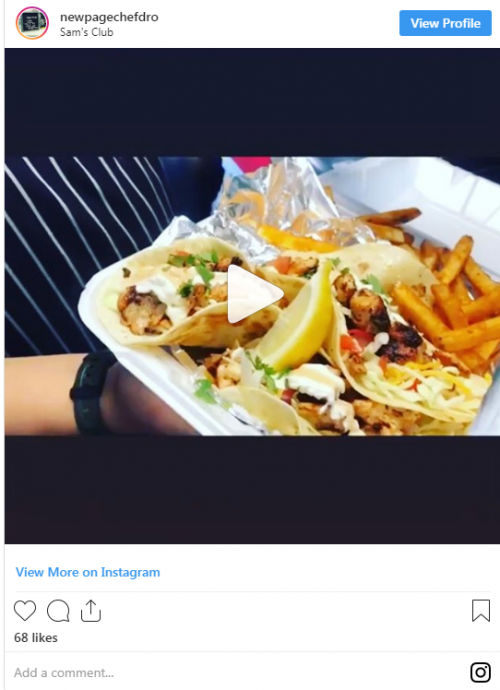 Chef Dro’s menu was tacked right outside the ordering window, sure. But the logo on the food truck read “Food Trucks of Virginia.”

Since April, Hampton Roads has been home to a kind of food truck new to this region. Food Trucks of Virginia is a sort of mobile culinary incubator for local chefs who have an audience for their food but no food truck or commercial kitchen.

Founder Donnie Fry IV said he envisions Food Trucks of Virginia as a sort of stepping stone for chefs who want to try the food truck business without shelling out tens of thousands of dollars in advance for a fully operational truck.

“I kind of saw the need for a step between ‘talented chef with sizeable social media following’ and the entrepreneur who has enough capital for an actual food truck business,” Fry said. “A food-truck incubator, so to speak.”

The terms are negotiated with each individual chef, but in essence it’s simple. Fry provides the truck and equipment, and handles the health and fire inspections, city business licenses, and incidentals such as serving plates and cups.

In exchange, the chefs pay a security deposit and a share of the business they do each day. As the food truck’s operator, Fry comes with the deal as a backup line cook.

Twice a week since May, Chef Dro has been in the truck serving a taco menu on Tuesdays and a wider menu on Thursdays including Hennessy pulled chicken, wings, and “rich boy” sandwiches with crab balls in place of shrimp.

On other days, chef Chuck Bing might use the truck to serve pulled-pork tacos and fried ribs under the name Bing’s BBQ. Or chef Jean-Pierre Collie-Ligon could be serving his thai chicken bowls or Korean-inflected bulgogi cheesesteaks for his business Nosh Munchie Group. 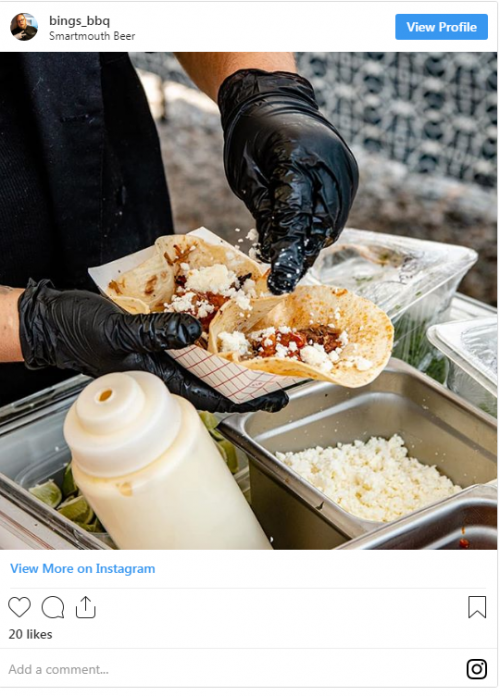 For Epps, the truck is a way to expand her audience — and move her business beyond catering and home cooking. Fry had approached her after watching her business grow online, with 3,000 followers on Instagram and counting.

“It works for me because I was unsure of getting my own food truck,” said Epps, who worried she might have to take on investors or go into debt without seeing how the business would go. “For me, it’s good since I have a decent customer base and they don’t mind coming to meet me where I am.”

Since getting into the truck, she’s seen hundreds of new followers on her Instagram page — and a lot of new faces joining her familiar customers.

For Bing — who also cooks at the Nosh food truck on the Peninsula and at the Mallory Country Club in Norfolk — it’s a matter of being able to see the kind of business Bing’s BBQ can do, without a lot of upfront risk.

“Food trucks of Virginia is something that has needed to be in Hampton Roads for the last 15 years,” Bing said. “I’m able to test my concept to to see how it’s received, and then work to make it happen. I don’t have to invest a bunch of money into a business not knowing how it’s going to end up. More chefs should be doing this.”

Fry said Food Trucks of Virginia can help chefs figure out whether it’s the business they want to be in at all.

“Even for someone who may have the capital, you can see whether that’s something you want to do. Go out one time, and you may not want to do it. You gotta be strong, you gotta be willing to sweat all day, you gotta go out and expect to get dirty. Get a taste for that and see if it’s for you.

For now, Food Trucks of Virginia is just a single truck, which allows Fry to be selective about his clients. He said he’s looking for chefs with a large fan base who are ready to ramp up to a larger platform for their food. He does, however, envision a small fleet.

“Think about how many pop-ups there are. There are so many,” Fry said. “If I had three FTVA trucks I would have three trucks at three places easily — we’d have team at the Garage, another one doing something at Commonwealth or Pleasure House.”

Ideally, he’d be helping a new generation of entrepreneurs fund their own food truck businesses — something he said he was able to do only after receiving a settlement from a car accident.

Fry founded his own food truck, Steel Spade Gelato, in 2017, and also serves his own food out of the Food Trucks of Virginia truck.

“I see this as a cycle: The pop-ups move on to trucks, the trucks move on to brick and mortar (restaurants). But until now, this step was missing. If you can create a revenue stream, awesome. Start saving your money and put it toward your own truck.”

Chef Dro is at instagram.com/newpagechefdro.

Bing’s BBQ is at instagram.com/bings_bbq.