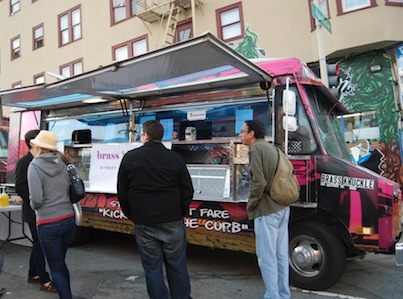 Gourmet food trucks may not be trendy enough for the Stuff White People Like list yet, but they’re well on their way.

And why not? The food is cheap, it’s made to order, and it’s way tastier (and healthier) than the stuff most fast-food joints serve.

Nearly every big city has one or two local services to help people track food trucks around town, but one company, Roaming Hunger, has managed to build a national database with more than 1,000 of them.

Roaming Hunger was founded in LA by Ross Resnick in late 2009, and site is now getting more than 100,000 visitors a month. The company released an iPhone app in March and it’s up to 10,000 downloads. It’s been run entirely on a shoestring — no VC backing yet — and has earned money mostly from custom software development and setting up food truck vendors for big events.

We caught up with Resnick by phone to talk about the food truck revolution and his part in it.

Among the things we learned:

Here’s a slightly edited transcript of our conversation:

Business Insider: How did you come up with the idea for the business?

Ross Reskin: I had traveled a bit and lived in Asia, and street food is something I personally was fascinated in.

In Bangkok, for 25 cents you get this thing of pad Thai, it will knock your socks off. It’s so easy — if you’re hungry the food’s right there and it’s good. I thought “why don’t we have this?” We had it for a very particular type of Salvadoran or Mexican food. That’s great, it’s wonderful to have in in Latin culture, but that was the only culture that was really embracing it.

Then in early 2009 we stated seeing a few trucks pop up here and there, the Green Truck. Around the same time I visited San Francisco and saw the Magic Curry Kart, the Creme Brulee Cart, and I wanted to know about all these vendors. I started looking online and in person and saw this whole world of street food that was emerging and fell in love with it.

BI: What were you doing before?

I come from a marketing background. Before that I was in university in Hong Kong, that’s how I came to be traveling in Asia.

BI: Do you coordinate events as well as provide location info for consumers?

RR: The crux of our business is providing awareness to consumers about street food vendors, whether it’s locations, information about vendors, menus, schedules. That’s the center of what we do. We have gotten involved in coordinating other events, bringing food trucks out to anything from art openings, bar Mitzi’s, marketing campaigns.

BI: Do vendors pay a fee to be involved?

RR: For some events. Sometimes we’ll just bring out trucks and have a party.

BI: How many trucks do you have?

BI: How many employees do you have?

BI: How does the business make money?

RR: We signed some software agreements, that’s the main way. Also putting together events with vendors.

RR: Yes, we’ve helped provide software for some other companies.

BI: Can you say who they are?

RR: Sorry, I can’t. We’ve done both online and apps. That’s the main thing that’s gotten us where we are today.

BI: Where is the street food movement most active now.

RR: California is very much a hub. A lot of people think New York is really big, but it’s not as big as one would expect. LA and SF are two of the bigger markets. Seattle was pretty early, it just never exploded. One that’s really good up there is Marination Mobile, they serve Hawaiian food.

BI: Is there a screening process? Or do you accept anybody who wants to be listed?

RR: They need to have an identifiable brand. If they can identify who they are, and have some information about their menu, they’re welcome to the site.

RR: We were in a recession, people were looking for cheaper alternatives to market. Starting a restaurant is very expensive.

Enough of a mass of people eventually saw this as feasible, that this international food court sprung up. This idea of good gourmet food coming to you was new — a lot of places had only chain restaurants.

BI: Do you see the trend expanding beyond urban cores into the suburbs?

RR: Can a suburb support same number of food trucks as a major urban center? No, absolutely not. But will people in suburbs demand gourmet food trucks ancillary to what they already have in dining options, absolutely yes.

The reason being, typically in suburbs there’s a lot of chain restaurants. This really gives an opportunity for independent proprietors to enter a new market with lower risk. It’s high risk to open a Vietnamese fusion restaurant in suburban area. A truck is much less of risk, the capital barrier much lower to get off the ground — or on the ground, really.

BI: What does it cost to set up one of these trucks?

RR: To get into a truck, leasing and buying, you’re looking at 50 to $150,000, deepening on level of customization, what kind of truck, old or new. Menu development, that can cost more or less, it depends on whether you have culinary experience. There are programs popping up, where for ten grand you can be rolling on a leased truck, leased commissary, on terms. It’s getting easier and easier.

BI: I’ve heard execs from Square talk about food trucks as being a big area for them. Is that true?

RR: I see Square used all the time. Food trucks and mobile food are definitely the right arena for mobile payments.

The mobile food scene is all about less infrastructure. Square can provide all these tools remotely for a vendor, all they need is this little apparatus. I have one myself, it’s pretty turnkey.

The biggest problem I’ve seen, anecdotally from all these trucks, people find [Square] so interesting that they hold up a line.  They want to know about what it is, they ask questions. But I haven’t heard of any pushback or anybody not trusting it with a credit card. It’s very meaningful for mobile vendors, it’s just amazing.