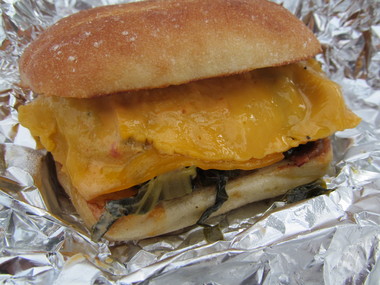 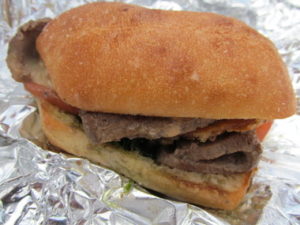 The star’s management charges this person with preventing their cash-cow from doing stuff like shooting other people with a Glock or shooting themselves up with powdered Persian heroin.

In other words: Reel-in the craziness.

At the Peppered Pig food truck, a butter toasted French bread bun serves this purpose. Except instead of reeling-in handguns or heroin, the bun keeps the creative ingredients on the Peppered Pig’s signature burgers and sandwiches from going sideways.

Take the Cuban B ($6.94), for instance. This sizable burger is topped with thin-sliced pork loin, sweet and spicy pickles, adobo mustard, Swiss cheese and cilantro. In the care of lesser bread, this mélange would get mushy, squishy and basically resemble a kindergartner’s art project after a couple bites.

But the Peppered Pig’s French bread bun keeps the ingredients corralled. Ah, and about those ingredients. The pork loin added a cool smoky flavor, the cilantro an herbal lift, the pickles and adobo mustard a sweet-savory contrast. 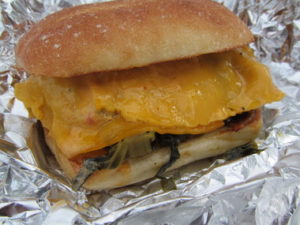 The country boy ($6.94) sandwich casts beer-battered fried chicken amid peppered bacon, Colby cheese, collard greens and Sriracha mayo. This busy ensemble resulted in a surprisingly cohesive taste. A redheaded dining companion referred to the sandwich as “smart food,” and I would tend to agree. That said, the Colby cheese’s taste was undetectable. Similar to how you never really heard the keyboard Linda McCartney “played” during Wings concerts.

Back to the burgers. The black and blue ($6.94) is seasoned with blackening spice and outfitted with arugula pesto, tomatoes and the just the right amount of Roquefort blue cheese. The burger patty itself was fresh, juicy and large enough the person who consumed it at lunch didn’t eat again for roughly 18 hours. 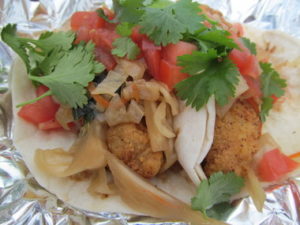 Yes, “cat tacos” ($6.94) is an unsettling name for a dish. But before dialing PETA, please note the two flour tortillas are filled with fried catfish not your Granny’s beloved pet Whiskers. The fish is cornmeal bread and Creole seasoned. Fresh toppings include cabbage slaw, diced tomatoes, cilantro, and Sriracha mayo. Pickled jalapenos are served on the side.

All of Peppered Pig’s burger variations can also be ordered atop fries ($4.63) instead of burger and bun – a hip spin on the chili-cheese fries template. As far as the Pig’s fresh-cut fries go, they’re crisp and dusted with a salty seasoning. Other sides include mac and cheese ($2.08) and a peppered-bacon deviled egg ($1.16). Definitely want to try those next time.

And there will be a next time. Peppered Pig’s well-executed food and intriguing menu renders this a lunch spot you’ll want to try more than once. (Other items include a Fire in the Hole burger with hot pepper relish, and the Chopper, a pan-seared pork loin sandwich)  But for expediency’s sake, you’ll want call-in your order, as a mere two-person crew operates the food truck venture.

The Peppered Pig’s nondescript white, 22-foot trailer is parked across from the South Parkway Schlotzsky’s, in the Antiques Market parking lot, next to an archery range. In terms of ambience, unless a mouthful of Parkway-generated carbon-dioxide appeals to you, you’ll want to take your Peppered Pig order with you. (There is a single red picnic table on-site.)

Since the Peppered Pig sets up in front of an antiques dealer, in theory, you could even sell your great-uncle’s old watch to generate funds for a Cuban B burger, if need be. That might actually be a decent trade.