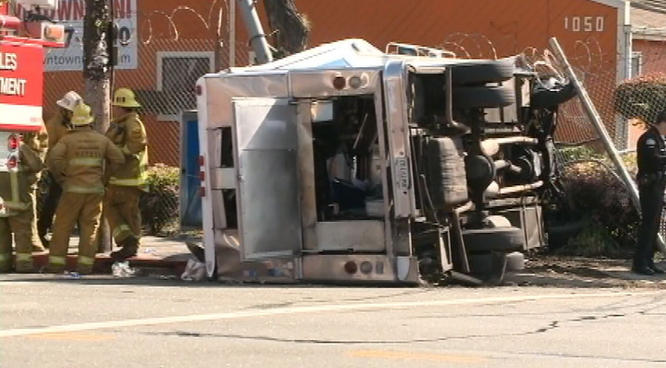 The 55-year-old driver of a food truck that collided with a vehicle in downtown Los Angeles Tuesday died at the hospital, according to police.

Elba Escobar, of Los Angeles, was traveling eastbound on Washington Boulevard when her 1984 GMC catering truck crashed with a 1991 Mercedes Benz trying to make a left turn from the westbound lane, according to LAPD.

Escobar was trapped in the food truck when the impact caused it to over-turn.

Her passenger, a 38-year-old woman from Los Angeles, was transported to the hospital, where she was listed in stable condition with minor to moderate injuries.

The driver of the Mercedes was also hospitalized with a non-life threatening head injury, police said.

While the cause of the crash has not been determined, police suspected that one of the drivers may have failed to stop for a red light.

An investigation is ongoing.