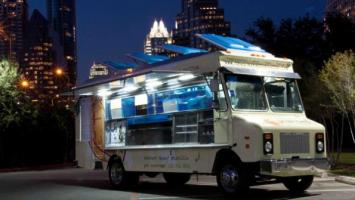 We already know that food trucks have led to permanent restaurant ownership for a few ambitious chef/owners. But what if you could skip the brick-and-mortar restaurant experience entirely and become a celebrity food truck chef/owner—complete with the kind of lucrative endorsement gigs celebrity chefs typically get?

That’s the move a quartet of food truck chef/owners have pulled off by signing on to create recipes for the Canola Council of Canada, a commodity board that represents the canola industry. The four contributed two recipes apiece to the Council’s website (www.canolainfo.org), basing them on the most popular items served from their trucks.

The four chefs and their recipes are:

Henderson, a Culinary Institute of America grad who has already parlayed his still-operating truck into the brick-and-mortar Skillet Diner in Seattle, says food trucks make it easy for creative chefs to find an audience in a hurry.

“The economic downturn has driven the street food trend in recent years along with Americans’ love of all things fast and convenient,” he says. “There are all these wonderful chefs looking for a way to bring their creations to the masses and now with mobile kitchens, it’s easier than ever.”

Each of these four chefs had a high profile in their individual markets, but were unknowns on the national level. That could change as a result of the exposure they’re getting from their deal with the Canola Council of Canada. Here’s how the council’s Street Eats campaign has panned out:

“A May 1st news release about the recipe collection has ‘driven’ about 425 articles —including Yahoo! Politics, MarketWatch and the Boston Globe—and nearly 151 million consumer impressions,” the council tells its members on its website. “A May 1st radio media tour with Chef Josh Henderson of Skillet included two national shows and 14 stations in major markets from coast to coast.”

Factor in the additional impressions that will accrue on the website via internet searches and these four chefs will have become stars overnight. (You can find their individual recipes at: http://www.canolainfo.org/recipes/collections.php?detail=42).

We’re thinking they could be on the leading edge of a new trend that positions food truck folks as industry innovators whose lead is worth following. Right now, food trucks are seen by many as hip and cool. We bet that the commodity boards and marketers who represent products that are not inherently hip and/or cool will be recruiting more truck chefs soon, if they aren’t already.