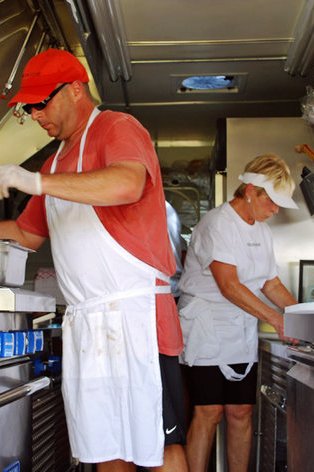 Troy and mom Pat on the truck.

Food truck meet-ups in Miami leave you with a staggering number of choices. Each one is colored in bright hues and has a catchy name or cute mascot. Walk through the line of trucks and you’ll likely pass a standout wrapped in flames, invoking a meal that’s flavorful, meaty and juicy. It’s The Rolling Stove, brainchild of owner and chef Troy Thomas. We caught up with this very mobile chef to chat for a bit.

New Times: How long have you been a chef?

Troy Thomas: I went to culinary school in the early ’90s in Chicago. I had a couple of restaurants there — The Gargoyle Bar & Grill and Big Mama’s Snack Shop. One of them was based on my jerk recipe. I’ve always insisted that recipe is good. I did that for a number of years and then I got into construction, but I missed food. I’ve always been a hands on guy. My hands are always going to touch my food.

Why a food truck?

I started the truck in April after real estate went south. There were no more building and no more construction jobs. I was trying to figure a way to get back into the restaurant business, so this is the most affordable way. If the restaurant doesn’t work in one spot, you can move it. I consider the food truck a big party, I consider everyone a guest in my house, even though it’s not a house.

Troy and mom Pat on the truck.

I couldn’t do it without her. Back in the day I couldn’t afford to pay anyone to help me and she wouldn’t take any money. She helped me with a lot of the cooking. She gets on the truck, she cracks the whip and she’s one of my best friends which is crazy, I know — to have your mom as your friend. We had the Food Network out on October and they filmed us for a day for Street Eats. Mom was a nervous wreck. And no, she’s not a chef, outside of cooking in the home.

Where do you prepare the food?

I don’t precook my burgers — they’re cooked on the truck. My jerk chicken takes five, six hours to make so that’s pre-made. I marinate my chicken wings and grill them on the truck. I sell so many of my Captain Crunch chicken tenders, I have to batter them and freeze them beforehand and then I pop them in the fryer. They’re good, there’s a little sweetness and a lot of crunch. The trucks are tight spaces, but I welcome anyone to go on my truck to see how clean my truck is.

What’s it like to be in the truck all day and all evening?

The truck is not a fun ride. The trucks break down. You’re putting an entire kitchen inside a metal box so you’re basically building a large oven. The truck interior gets up to about 120 degrees. A lot of truck owners think it’s hot now? They’re going to be surprised in a few months.

Is there “community” within the food truck community?

Everyone’s pouring their heart and soul into their trucks — many people have put their life savings into their trucks. Burger Beast is a good guy and he helps the entire truck community. We all get along, we all want this to work. It’s easier working together.

Can you make money with a food truck? What’s your biggest obstacle?

Everyone’s limited by what they do. As the trucks get bigger you can make more money. The smaller you are it’s more of a struggle. The little guys only carry so much food and then they’re done for the evening. My goal is to have a big kitchen with people cooking all day and when you run out you get more — like a support vehicle. If I had the capability of restocking the truck I could do more. I’m the struggling small guy. There will be trucks that will sell out all their food for the week on Friday night.

New Times: How do you choose your locations?

Troy Thomas: I wouldn’t even know where to go on my own. I’m like the little brother asking other trucks can I come, can I come?

Are Food Truck Roundups the way to go or do you prefer to go out on your own?

My real problem is that I’m so involved with cooking I don’t have time to scout out locations. I’m in Delray, my kitchen is in West Palm. Like yesterday, I left Delray at 1:30 to get to Biscayne in time for dinner. The truck owners are trying to find solutions. I’m going to share a parking space in North Miami with the Miso Hungry and Purple People Eatery trucks. Everyone’s trying to find trucks to work with, alliances, people that they get along with.

I hear the police have given the trucks a hard time.

There weren’t really police chasing us. At the 109th and Biscayne spot, a truck went onto private property and the person that owned the property got angry. All it took was that one person to get the police involved. The meetup actually got too big for that spot. The spot we have on 127th and Biscayne, we pay a permitting fee for each week. It’s totally legit.

There are so many trucks at the roundups — do you have any tips for choosing which one(s) to eat at?

I see people just wander around, like zombies, walking from truck to truck. They’re confused. The people who work for me think I’m crazy, but I tell people before you buy from me, look around at all the trucks. And the longest line doesn’t necessarily mean the best food. The biggest line could mean the slowest truck so you can’t go by that. Go on Facebook, Twitter, and investigate. We try things from different trucks and there are so many different kinds of food. A lot of the trucks are now doing smaller plates so that people can try a number of different things. I do empanadas , one is chicken from my jerk chicken sandwich and the other is sloppy jerk so If someone wants to try jerk chicken, I suggest the empanada. It’s a smaller bite than my sandwiches, which are pretty big.

As long as you follow directions or go to someone who builds food trucks, you won’t have a problem. I had to submit architectural drawings for the truck and I had to submit the menu. They want to know if you’re doing chicken, etc., because there are health issues with certain foods. That’s s step that regular restaurants don’t have to go through. I submitted the plans while the truck was being built and then I had a week before my health inspection. I’m licensed through the state, so in Miami I just had to get an occupational license . Now there are longer waits because there are more new trucks. There are one or two trucks a week coming down the pipeline.

Do you think this is a trend or the start of a food revolution?

We’re just starting out. The oldest truck hit the streets Dec of ’09, so we’re new.

Why do you think food trucks are becoming so popular?

The food isn’t necessarily cheap. It’s more the fun aspect. The hunting down of the trucks. It’s like a game of hide and seek. Our motto is catch us if you can.