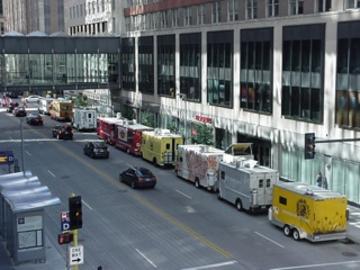 Food truck wars, lunch wars, skyway vs. food trucks — the conflict between the brick and mortar restaurants in downtown Minneapolis and the growing population of food trucks has bred plenty of euphemisms, but essentially the situation comes down to a question of turf. Some restaurant owners have asked food trucks to disperse their ranks throughout downtown to ease the heavy concentration of trucks along the eastside of Marquette Avenue.

Earlier in January, citing revenue and parking loss, a coalition of downtown restaurants, who call themselves the Downtown Food Committee, held a meeting to discuss the concentration of food trucks parking between 6th Street and 8th Street on Marquette and how it was adversely affecting their businesses.

Some of the restaurants have reported up to a 30 percent drop in revenue, said Doug Sams, head of the Downtown Food Committee and owner of downtown’s D. Brian’s Deli & Catering for 26 years. Sams believes that the heavy concentration of trucks on Marquette has disproportionately hurt the area’s brick and mortar businesses. Others believe too much blame is being placed on the rolling restaurants. Sameh Wadi, owner of Saffron, as well as the popular food truck World Street Kitchen, thinks that food trucks are easy targets.

“One thing we’re not taking into consideration is the actual economy of the city,” said Wadi. “My sales went down last summer at Saffron, where it’s not next to Marquette, where it doesn’t rely on that one lunch business.”

Other food truck owners feel similarly, believing that area restaurants need to step up their food and compete as if the food trucks were just another restaurant moving in. “This is the American way,” said John Levy, co-owner of Andrew Zimmern’s AZ Canteen and leader of the recently formed Minnesota Food Truck Association (MFTA). “We get to compete just as you do.”

Wadi, along with about 25 other food truck owners who are part of MFTA, will be meeting on March 5 to further discuss the situation on Marquette. Both Wadi and Levy said they are open to the possibility of moving operations from Marquette, but need to take their own businesses into account first. “If it turns out Marquette is the magic area, say they can do 20 percent more there, then we have a whole different issue,” said Levy. 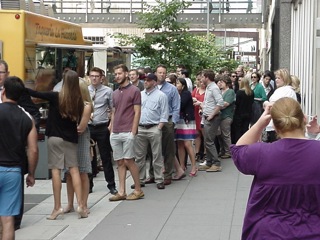 According to Sams, it’s not just the restaurants being affected, but the local retailers as well, whose customers relied on those parking spots that are now continuously occupied by food trucks. “Nobody expected up to 18 trucks to line up and to concentrate on Marquette Avenue,” said Sams. “Fast Signs serves a lot of people that park at the parking meters… and from last summer, his customers had no parking meters, and the reason is the most aggressive food truck owners wind up at 8:45 in the morning and race down to Marquette.”

Two years ago, the food trucks were allowed on Nicollet Mall, where they’d park on the sidewalks, said Sams, but an ordinance change, due to sidewalk damage, moved the food trucks off Nicollet and they flocked to Marquette, where they benefitted from the thousands of customers coming from the Wells Fargo and IDS towers.

The meters open up at 9 a.m., explained Sams, and because of the abundance of food trucks and lack of parking, the food trucks compete with one another for spots. “There’s about 56 food truck licenses in the city [of Minneapolis] last summer, and there’s only 18 parking stalls,” said Sams. “At 8:59 a.m. you got to squeal into one of those parking meters or you’re shut out.”

Another complaint that many brick and mortar restaurants also cite is the lack of additional property taxes paid by the trucks, which many see as unfair, said Sams. While it’s true that they don’t pay property taxes on the truck, according to Wadi, the food truck must operate out of a licensed kitchen in the city, and is therefore more of an extension of a restaurant, where they do pay a property tax.

Despite their complaints, Sams said their intentions are not to get rid of the food trucks, which he believes bring vibrancy and entrepreneurial spirit to the city, but rather come up with a compromise that benefits both parties.

“In many other cities, their city councils have provided reserved designated parking locations for the food trucks. We think this is a good idea,” said Sams. “We think that it would eliminate the squatting that happens between 9 a.m. and 11 a.m. if the trucks had reserved locations.”

From there, the trucks could take turns rotating between four or five different zones, which Sams believes would benefit the trucks as well, by potentially opening up a bigger market to them.

As of today, if rotations were to work, the food trucks would have to move based on the honor system, and the city is far from making any decisions just yet on reserved designated spots for the trucks.

“Food trucks are allowed all over downtown and in neighborhoods across the city,” wrote Lisa Goodman, Ward 7 Councilmember, in an email to the Twin Cities Daily Planet. “The trucks go where the customers are located and will continue to want to be where people are in walking distance to access them. The city is not prohibiting them from going all over, the market is doing so. I am not sure the city wishes to get in the middle of assigning spots.”

Wadi believes the city could help simply by limiting the food truck licenses given out until the situation on Marquette is resolved. “Minneapolis is aware of the issue that Marquette is congested, and they haven’t stopped giving food trucks new licenses,” said Wadi, which he compared to keeping the faucet running.

Sams’ money is still on rotating between reserved spots for the trucks, but until the city does decide to do something, it’s first come first serve.