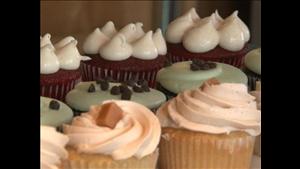 MINNEAPOLIS, Minn. — The wildly popular bakery Cupcake on University Avenue SE has expanded to downtown Minneapolis. It’s an expansion they say they had no choice but to implement.

“With construction on University Avenue for the light rail, there’s a loss of parking and it’s affected business,” said Kevin VanDeraa, owner of Cupcake.

The eleven-mile four-year project will eventually connect Downtown Minneapolis and St. Paul with a stop near Cupcake, but until it’s done the bakery will lose all its parking and part of the front patio.

To make sure business continues to boom, VanDeraa and his team will load up a bright orange and blue van each day and park it in downtown Minneapolis.

To find out where it’s parked and what cupcake varieties (including gluten-free and vegan) they’re offering follow them on Twitter (@cupcakeonthego).

Though this is their first week downtown, things are off to a great start. On Thursday they sold out.