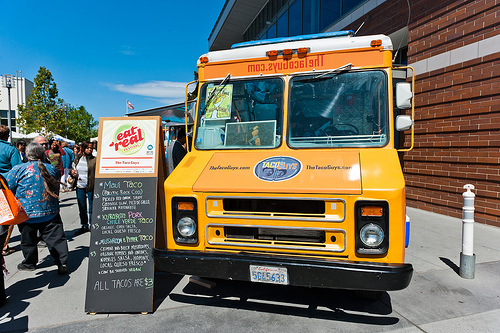 2010 was the Year of the Food Truck, with cities from Seattle and San Francisco to D.C. taking it to the streets, literally. While street food and taco trucks have long been a part of U.S. culture in places like New York, Los Angeles, and Oakland, health regulations have historically made it considerably more difficult in other parts of the country. Eatocracy reports that Atlanta–despite its tight mobile cooking laws-now has a “hybrid” approach that enables food trucks to exist, albeit in a different form. Could 2011 become the Year of the Mobile Farmers Market?

For the uninitiated, street food technically refers to food that is prepared (cooked, if applicable) and sold from a street cart, stall, or permanent stand. Food trucks are essentially mobile street food, and may change location from day-to-day, or remain parked in a stationary spot. These are not your “lunch” trucks of old, selling flabby sandwiches and processed, grab-and-go items. Today’s food truck offers food prepared from seasonal produce and other ingredients likely sourced from local family farms.

Until recently, state and county health departments largely prohibited street eats due to fears regarding potential foodborne illness. It’s harder to regulate things like sanitation and temperature control in a non-stationary kitchen, but far from impossible. Thanks to the open-mindedness of city officials across the country, enterprising chefs and other food industry professionals have been able to give mobile food operations a shot, the most successful of which have gone on to achieve national acclaim. Portland, Oregon, has been so supportive, there are now permanent designated locations for food cart clusters.

But even as we’re becoming more of a food truck nation, it’s still an uphill battle. Eatocracy states that Chicago is just one city making it next to impossible for actual cooking to be done on-site. Instead, food must be pre-packaged, which is a buzz-kill for many budding entrepreneurs. Atlanta requires convoluted logistical wrangling (trucks selling cooked-to-order food must change location every half-hour, nor operate at more than two locations a day) to deter operators. One local farm’s solution: focus on the raw ingredient, not the end product.

Riverview Farms of Ranger, Georgia, has created a mobile farmers market that brings sustainably-grown produce to various locations in Atlanta. As creator Elmer Veith puts it, “We’re going to bring the farm field to the neighborhood, so you don’t have to come to us.”

Veith retrofitted a Mac Tools truck to create Riverview’s Farm Mobile. Customers enter the truck from the rear, and pay before exiting at the front. The sides are outfitted with shelves for produce, as the well as the farm’s cornmeal and grits. There’s a freezer for Riverview’s grassfed beef and heritage Berkshire pork. Other offerings may include bread, pasture-raised chickens, free-range eggs, and cheese from other local food artisans and farms.

Customers get updates on Farm Mobile’s location and that day’s product via email, Facebook and Twitter. The social media aspect is a key part of the success of today’s food trucks. Yet Farm Mobile is subject to less regulations, because they’re not selling prepared food. They’re licensed by state authorities, and require permission from property owners to park on their land. If outfits like Farm Mobile (or Richmond, Virginia’s Farm Bus) catch on, can we expect to see more markets on wheels servicing urban areas? Greg Smith, President of the Atlanta Street Food Coalition, hopes so.

“Street food adds life and vibrancy to the city,” he says, predicting that in the future, “There will be multiple ‘food truck lots’ around the city and the trucks might move on a daily basis from lot to lot.” The Coalition, which seeks to help entrepreneurs break into the industry, is yet another sign that mobile eating is here to stay. TruxMap is an iPhone app that lets users hunt down their favorite food trucks, while dedicated sites such as Food Carts Portland are attracting legions of fans. The best way to show support, however, is to start eating on the street. Check out Eater.com, to see if there’s a food or farm truck (coming) near you.