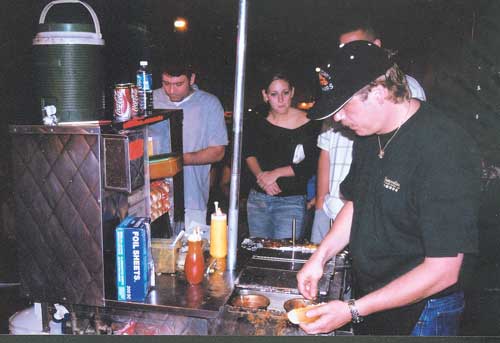 Morgantown City Council is telling sidewalk cart and food truck vendors where and when they can sell their wares.

After 30 minutes of heated public comments, council members voted Dec. 17 to evict sidewalk vendors from the 300 block of High Street and to assign parking spaces to food trucks at designated times.

Morgantown City Manager Jeff Mikorski cited public safety concerns created by congestion in that area as the reason for the changes.

Beginning Jan. 1, between 11 p.m. and 6 a.m., no one can sell anything on the High Street sidewalk between Walnut and Fayette streets. Hot dog carts and other such vendors who set up in that area now will have to move to another section of High Street, such as across Walnut toward the Monongalia County Courthouse.

And beginning Jan. 1, truck-based businesses may sell food and other goods in the Downtown Business District only from parking spaces assigned by the city, for $13-$14 per night. The businesses may be allowed to set up downtown at other times during special events such as festivals. Mikorski said on-the-street food vending outside of 11 p.m. to 6 a.m. has never been allowed in Morgantown.

Both kinds of vendors also will be required to pick up any trash resulting from their sales that falls within 50 feet of their locations.

That stretch of High Street is home to many bars, restaurants and clubs.

“The problem is there are between 3,000 and 4,000 people exiting the bars about 2 and 4 a.m.,” said councilwoman Nancy Ganz. “It’s very dense and where it’s dense the police can’t patrol and help people.

“Some of these people are very drunk and passing out.”

The city considered another alternative, she said.

“We asked the state if we could close the road in the evenings and the state said it’s a state road and cannot be closed. Our second choice was to move the street vendors,” Ganz said. “Nationally most street vending takes place on private property or municipal property that’s wider and there’s a huge fee attached.”

Mikorski said he thought there had been a misconception the city had been trying to eliminate downtown vendors.

“All we’re trying to do is manage where the vendors are located so it doesn’t create congestion points on sidewalks that in the past have created bigger problems,” he said.

This isn’t the first time the city has sprung into action to thin the High Street crowds. Two years ago it moved bus stops and a taxi stand farther down the street. Then, when food trucks took those parking places, blocking police from seeing the whole street, Mikorski said, parking was eliminated with barricades during certain high-traffic times.

More than a dozen people spoke against the changes at the City Council meeting and even more expressed their disagreement on Twitter.

Bethany Royce, who said she’s lived downtown for 12 years, said during the public portion of the meeting  moving the vendors creates another public safety concern for their customers.

“The 300 block is the busiest and also the best well lit,” Royce said. “It has the most cops. Nobody’s going to go (farther down the street) because they’re afraid.”

“Parking permits will be given on a weekly basis, but a vendor can schedule as many weeks or days in a week he would like,” said Susan Sullivan, Morgantown’s public communications manager. “The cost is $14 per night, and $13 per night if they are in the same space three consecutive evenings.

“They can choose to be there any evening of the week, and are more than welcome to take a look at local events and schedule their permits as far into the future as they would like.”

Glymph now parks his taco truck in one space at the top of High Street and feeds the meter 50 cents an hour.

“We pay as low as $5 a night,” he said. “They say ‘We’re going to protect your spot and you’ll have your spot,’ but you really can’t believe that at the end of the day. That spot has been there for quite some time and we’ve never had an issue with anybody else parking there.

Some claimed government is overreaching its authority to try to control free enterprise — essentially giving an advantage to brick-and-mortar eateries that stay open until 4 a.m.

“I can’t see them telling a brick-and-mortar food shop that they have to move their location out of the 300 block because it is too congested,” said Morgantown resident Robert Lightner. “That would likely be thought of as absurd, yet you are asking street vendors to relocate.”

Lightner, a touring musician and former Morgantown business owner, watched the meeting live online because a friend is considering selling his food truck since this amended law passed.

“The issue I see here is that the street vendors have established locations that they have built over time,” he said. “People count on them being in a certain location. They have existing agreements with property owners as to where they are permitted to set up shop.”

Anna Carrier, co-owner of The Cupcakerie on High Street, which sometimes sends a worker out to sell cupcakes from a red wagon to nightlife crowds, said she doesn’t think the ordinance will affect her business, but she’s still hopeful it will one day change.

“The big cities are getting food trucks and it’s a new thing,” Carrier said. “It would be a shame if Morgantown couldn’t progress in certain areas. Just because something is put into effect now doesn’t mean it can’t change in the future.”

The change in the law has driven at least one food truck owner away from selling downtown.

“It never was an idea to go down and only serve drunk people,” said Shanks, who raised more than $10,000 in start-up money on crowdfunding website Kickstarter. “I can’t go down there at 11 p.m. and sell food ’til 6 a.m. I wanted to go down there at dinner time.

“I probably wouldn’t have done the food truck if I had known I wouldn’t be able to use it,” Shanks said.

Nonetheless, he tried to sell on High Street one night.

“We really got kinda hassled by management from one of the restaurants telling us to leave,” he said, adding that he refused, citing his hawker-peddler permit. “It was really cold that night. We decided that night that, due to the weather, we would forego the food truck for now until the weather gets better. Our main focus is our restaurant and the catering aspect of our business.

“It’s not the American way,” Shanks said, “to tell someone ‘You’re cutting into my business so you have to go.'”