A proposal before the Trump administration that food trucks, Wi-Fi and Amazon deliveries be allowed in campgrounds at national parks got a thumbs-down this week from some visitors at Yosemite National Park. 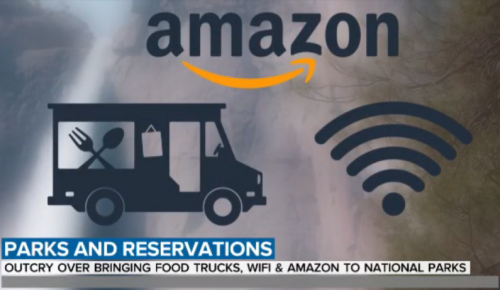 The idea comes as the Department of Interior considers recommendations from an advisory committee to modernize and privatize the operation of campgrounds, including adding running water, tent and cabin rentals and extended family sites at select parks.

The recommendations were made public online last month, and no decisions have been made, a National Parks Service official said.

“We’re basically suggesting that would be a way to improve overall camping experiences,” said Derrick Crandall, vice chairman of the Outdoor Recreation Advisory Committee, in an interview last month with the Associated Press. “Are we talking about pricing people out of national parks through this? Not at all.”

He told the Los Angeles Times that “Our recommendations would allow people to opt for additional costs if they want, for example, Amazon deliveries at a particular campsite.”

Some visitors at Yosemite National Park in California told NBC News this week that they don’t think amenities like Wi-Fi are necessary at the famed attraction.

“Not sure why you would need Amazon packages to get delivered to you when you’re in a national park,” said visitor Jen Storie.

“This is where you can connect with the Earth and what’s here,” said Dan Farquhar, of Roseville, California. You don’t want a lot of outside interference.

“I can do without Wi-Fi, and I think a lot of people would be better off if they came up here to get away from Wi-Fi,” he added. “… when you have Wi-Fi, that’s what you’re doing. You’re spending a lot of your time on your phone, when you should be absorbing what’s here.”

The recommendation letter from the “Made in America” Outdoor Recreation Advisory Committee, which was created by former Interior Secretary Ryan Zinke, says there is “broad consensus” that the current national park campground system, largely operated by federal employees “combines inadequate and outmoded visitor infrastructure.”

The committee says the campgrounds have not kept up with the demands of modern users, and that while data on campgrounds is of varying quality, evidence suggests amenities such as Internet connections and food services could boost agency revenues, and the costs could be transferred to the private sector.

David Vela, deputy director of the National Park Service, said the advisory committee was dissolved on Nov. 1, and that both the Interior Department and the park service are reviewing the suggestions.

“No action has been taken on the committee’s recommendations nor will any action be taken in the future unless and until the Department of the Interior and the National Park Service determine the recommendations will improve the visitor experience, protect national park resources, and are determined to be prudent investments,” Vela said in a statement.

Scott Gehrman, founder and executive director of Lasting Adventures, Inc., a guide service for hikes, backpacking trips and other outdoor excursions, said some campgrounds in Yosemite could be modernized, including updated restrooms.

But he worries about how much commercialization a place like Yosemite, with its breathtaking vistas and towering waterfalls, can handle.

“I’ve always kind of said, I have a concern if you drive into Yosemite and it looks like Las Vegas — you know, we don’t want signs up everywhere,” he said.

“Yosemite used to have a food truck over by one of its most famous trails, and it just was kind of discreetly blended in,” Gehrman said. “So, I’m not necessarily opposed to the idea because if you could do it discreetly in a campsite and make it convenient for people and lessen the lines in some of the other areas, that might be a win-win.”

More than one-third of the 419 properties operated by the National Park Service have campgrounds that range from primitive, backcountry sites with no amenities to campgrounds that are easy to reach by road. About 6 percent are operated by concessionaires, according to the committee. Few have amphitheaters, Wi-Fi, electricity or hot showers year-round.

The committee said individual parks could nominate campgrounds for selection in a pilot program of five to 10 sites that would be modernized or enhanced, especially those with few visitor services.

The entire national park system recorded over 318 million recreational visits in 2018, the third-highest since record-keeping began in 1904. But visits were down about 12.7 million, or 3.8 percent, from 2017.

The park service said in a report that closures still in effect last year from 2017 hurricanes in Florida and wildfires in California were among the issues that affected those numbers.

The Interior Department does not have to accept the committee’s recommendations. But it has said it does not have the money to modernize the more than 1,420 campgrounds in its system nor does every campground need upgrades, the Associated Press reported.

Some younger Yosemite visitors noted that cell service is already available there. And if people want to share photos of the park’s awe-inspiring sights?

“Save that for later,” Storie said.

National News: The Next Logical Step for Food Trucks is to Board a Cruise Ship