Back in 2012, the U.S. food truck industry for the first time blew past the $1 billion revenue mark (it in fact reached $1.5 billion that year), making it one of the fastest-growing sectors of the national food and restaurant market. Still, food trucks are often seen as the enemy of local restaurants. Just as cab drivers have taken to protesting Uber and other ride-hailing services, brick-and-mortar restaurant groups have rallied in cities across the nation to ban or limit food trucks.

But what do food trucks actually mean for urban economies? What impact do they have on local restaurants, food industries, and our choices as consumers?

A recent study from Elliot Anenberg of the Washington, D.C. Federal Reserve System and Edward Kung of UCLA takes a detailed look at the economy and geography of food trucks in our nation’s cities. To get at this, the study uses unique data on food trucks from the U.S. Census Bureau and a dataset of daily Washington, D.C. food truck locations, as well as social media data from Twitter and Google Trends. The study is particularly interested in the connection between food trucks and new digital technologies—especially social media—and how food trucks make use of them. Here are its five big takeaways.

1. Twitter is a big factor in food truck location.

The classic theory of location, outlined more than a half century ago by Harold Hotelling, uses ice cream trucks to explain retail competition. The example goes like this: Two ice cream trucks are competing for sales along a stretch of beach. While it might make sense for them to set up shop on opposite ends of the beach to avoid competition, both decide to station themselves at the center of the beach to gain access to the most consumers. But if more and more ice cream trucks come into play, a search for new locations and new niches begins.

Modern food trucks obey a similar logic. In fact, they are a fantastic case study for this kind of location problem since, as the study points out, they suffer from “spatial information friction.” This means that factors such as congestion, parking troubles, or mechanical failure can prevent a food truck from arriving at its intended destination.

To examine how food trucks use the internet to cope with unforeseen circumstances, the study turns to the Twitter feeds of 200 food trucks in the Washington, D.C. metro area from 2009-2013. After identifying tweets that included location information, the authors found that 2.3 percent of all tweets from D.C. food trucks reference an unintended change of plans. While this number may not seem like a lot, it means that there is about a 1 in 13 chance that a food truck will not arrive on time at its anticipated location. The study also found that tweets indicating location uncertainty tended to occur last-minute, and around lunchtime. New information technology really does seem to connect food trucks to their markets and consumers in real time.

2. The connection between food trucks and digital technology is greater in big, dense cities.

The study uses Google Trends to track the relationship between social media and the size of the food truck market from 2007-2014. As the figure below shows, bigger cities yield a greater number of food truck searches, which the study uses as a proxy for the size of their markets. The study notes that internet technology seems to have had a greater effect on food truck location in big cities, where markets are larger and things like congestion or parking trouble are more likely to inhibit mobility.

Looking more closely at the chart, however, knowledge and talent hubs like Washington, D.C., San Diego, San Francisco, and Raleigh have far more searches than their populations would otherwise suggest. Meanwhile, larger cities like New York, Chicago, and Philadelphia have far fewer searches than one might expect. It could be that residents of big, dense cities don’t have to search as hard to find a food truck nearby (although there are other barriers to their mobility). Or perhaps the tech-savvy knowledge workers of Washington, D.C., L.A., and San Diego are simply more adept at using the internet and social media. 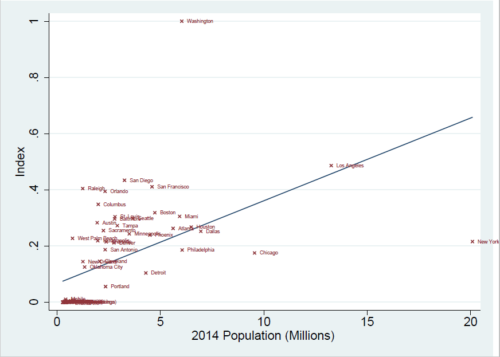 3. When it comes to location, variety matters a lot.

One of the study’s biggest findings revolves around the connection between food location and the variety of choices open to consumers. To get at this, the researchers created a computer program that tracked 70 unique locations for over 200 food trucks in Washington, D.C. According to their findings, the average food truck visited nearly 8 different locations between May 2012 and March 2013, with 93 percent of trucks visiting at least two different spots. The most popular overall locations were L’Enfant Plaza, Farragut Square, and Metro Center.

Variety, therefore, is a key factor—if not the key factor—in the economic success of food trucks. In fact, going back to the same location day after day appears to have a strong negative effect on financial performance. Visiting the same location two days in a row caused trucks to lose $257 a day, roughly 38 percent of their average daily profits. This effect was even more significant than if it was raining or snowing (a loss of 26 percent), if it was cold outside (19 percent), or if the truck charged a ten percent sales tax (31 percent). This points to a genuine consumer desire for a variety of food truck options, the authors argue.

5. Food trucks cause households to spend more money on eating out.

To determine the impact of food trucks on consumer spending, the study collected data on household consumption from the Consumer Expenditure Survey, which controls for income and education. Ultimately, the study concludes that the share of money spent on food away from home was positively correlated with the Google search activity for food trucks (again, a proxy for the size of the food truck market). While food trucks tend to be cheaper than standard restaurants, the authors argue that food truck variety—not price—had the greatest impact on this type of household spending. That’s not only a good thing for cities, but for the people who live in them as well.