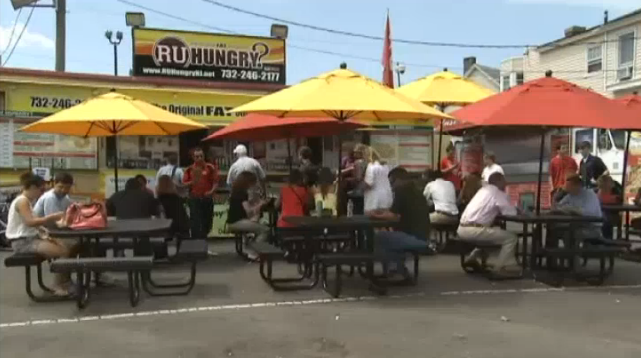 Some Rutgers University students call it an end of an era.

The grease trucks that have sold calorie-laden so-called “fat” sandwiches for years will be displaced from Lot 8 on College Avenue in New Brunswick to make room for student housing.

The names of the sandwiches alone are enough to make a cardiologist choke: the number-one rated Fat Darrel, the Fat Koko or the Fat Moon.

“It’s bacon, fried egg, chicken fingers and fries, lettuce, tomato and ketchup,” said Joe Macirowski as he chowed down on a Fat Moon. “It’s breakfast and lunch at the same time.”

“I came here for school, and this was your go-to place,” said Mike Tumblety. “You could come here anytime throughout the day, whether it be lunch or late-night study hours.”

Regulars may ignore the calories, but they can’t dismiss the trucks’ 50-year presence — first just off the New Brunswick campus on College Avenue, then onto a university parking lot for some 20 years.

“The fact that they have to leave this area, for a Rutgers alumni, it’s really sad,” said Kristin Markowski, a grease truck fan.

Rutgers officials expect to disperse the vendors around the New Brunswick and Piscataway campuses.

The school says it has been in discussions with the food truck operators, who are expected to begin relocating next Thursday.

Some food truck operators will be invited back to set up outdoor stands in a plaza that will be created for the new housing complex.

The latest owner of the original RU Hungry? truck said he’s agreed to move to the Livingston campus two miles away.

“They will find us,” said Ayman Elnaggar. “We will not be too far away.”