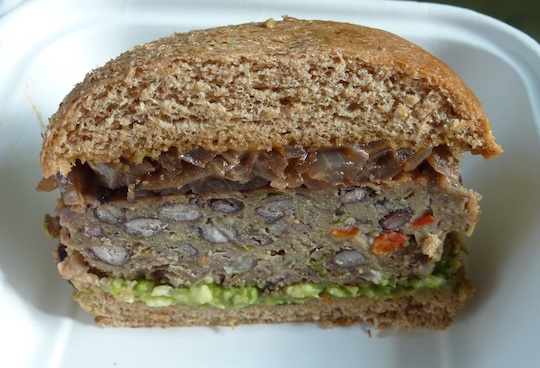 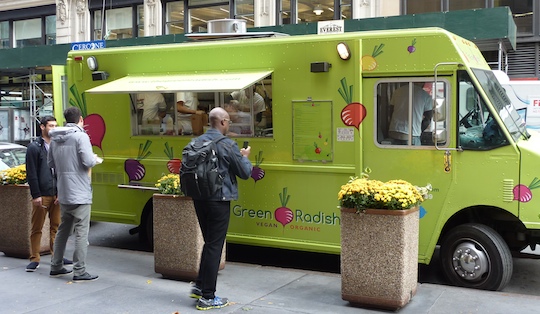 I know that food trucks are the rage these days but to be perfectly honest, they’ve never really excited me too much.

Maybe that’s because so few of them are organic, and the majority of the ones that line the streets in New York City don’t look appetizing at all.

So, when I heard about a new vegan organic food truck here called The Green Radish, I was a little hesitant.

Yet, what spurred me to go check it out was that owner/operator James Rafferty has some serious credentials. Not only is he a Culinary Institute of America graduate, but he was formerly the sous chef at Bouley, one of the top restaurants in NYC, and has also logged time at other Michelin star restaurants.

Needless to say, I was blown away by the quality of the food at The Green Radish and here are a few dishes that I tried. 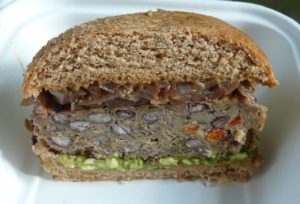 Along with black beans, this sandwich had cilantro, avocado, melted onions, and chipotle mayo, and was served on a sprouted wheat bun. I have never had a black bean sandwich with such fantastic texture. 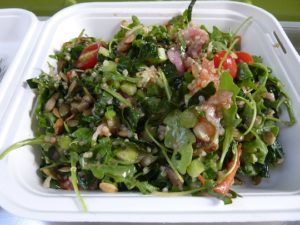 I think the picture speaks for itself. Awesome. 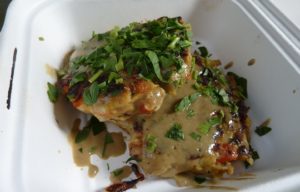 These crabless cakes were made of hearts of palm, peppers, and a lemon-tarragon cream.

This wasn’t just the best dish at The Green Radish but was one of the best dishes I’ve had at any organic restaurant in NYC. Ever. The flavor profile was out of this world. 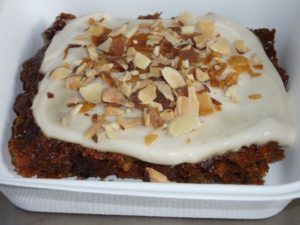 Overall, I can’t say enough good things about The Green Radish. The food was fresh, flavorful, and incredibly filling, and it is only a matter of time before it has lines 20 or 30 people deep.

With a real lack of organic restaurants in Midtown Manhattan, this truck is a must-visitdestination for anyone who works nearby and wants incredibly healthy and great-tasting vegan food.

The Green Radish moves throughout the city but can often be found around 56th and Broadway during the week. For its exact location each day, please visit its Twitter page.

Without question, I will be going back to The Green Radish and have added it to myFavorite Organic Restaurants in NYC.