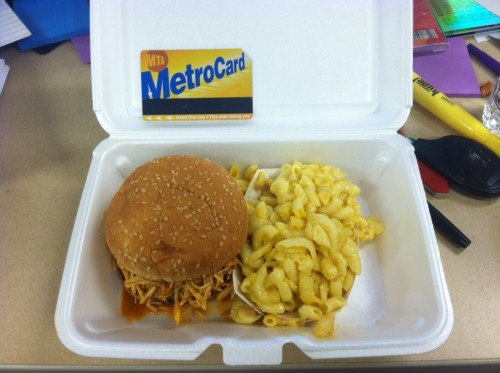 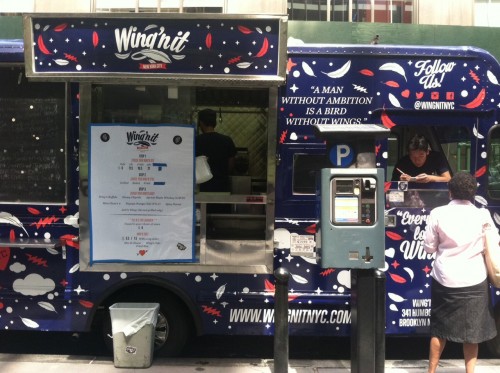 When Brian first reported that there was now a chicken wing truck in Midtown called “Wing ‘n It,” I seriously started craving some good ole buffalo chicken wings. The only drawback was the $1 per wing price tag. To me, paying $1 per wing is almost like a tax on wanting to eat wings not at a sports bar and before 5pm. Wings aside, if you look further down the menu, Wing ‘n It has a “Pull ‘n It Chix Sandwich” that doesn’t get nearly enough attention as it should…

At the Wing ‘n It Food Truck, which was parked on 47th between Madison and Park the day I went, you can either get 6 wings for $6, or for the same $6, you can be assured you will be full and get the Pull ‘n It Chix Sandwich, which is a pulled chicken sandwich tossed in any of their signature sauces including Wing ‘n Buffalo, Honey Chipotle, Apricot Maple Whiskey (AMW), Miso Glaze’n It, Papaya Orange Chili (P.O.C.), or Spicy Peanut. Though I was intrigued by the Apricot Maple Whiskey or even just a straight Buffalo Hot Sauce, I decided to go by the recommendation of the guy taking my order, which was the spicy peanut sauce. 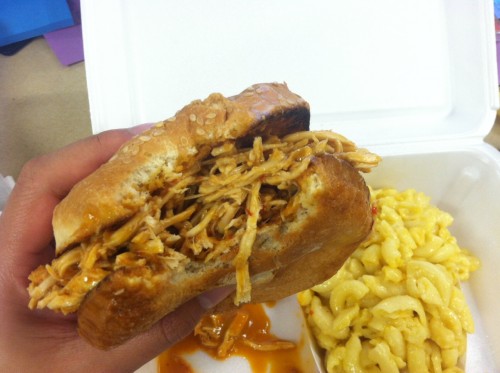 At $6, this sandwich is pretty hefty and drives home the fact that you ordered the sauce that you did, which thankfully, made my choice amazing. More than a patty’s worth of pulled chicken overflows from a toasted hamburger bun, and the chicken is GENEROUSLY smothered in a thick, peanut sauce and sprinkled with a healthy dose of chili flakes. Yes, you will be needing all of the napkins and the towelette that they throw in the bag because this sandwich is MESSY. 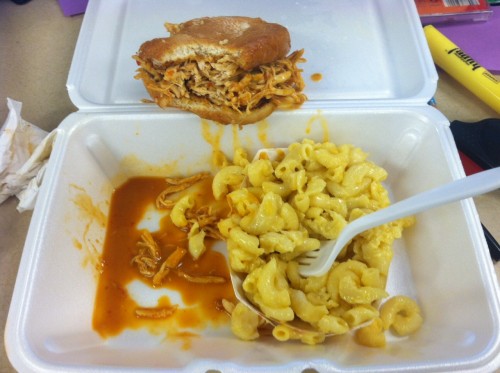 Additionally, for an extra $1.50, you can choose to get a side of mac ‘n cheese, which is $3.50 if you for some reason order it alone and decide not to get any chicken. I was expecting this side to be just an ice cream scoop worth of mac ‘n cheese, but it was way more than that, and much needed to balance out the spiciness of the sandwich. I did, however, find myself dipping mac ‘n cheese in the sauce left in the styrofoam tray that had dripped from my messy sandwich.

For a total of $7.50, I was incredibly full and content with my comfort food lunch that had the added twist of the spicy peanut sauce. Though spicy peanut sits on the more normal side of the sauces Wing ‘n It has to offer, I’m curious about trying their other sauces, and may even splurge for their wings now that I know their sandwich and side portions are pretty large. Who knows, maybe I can get full off of only six chicken wings?