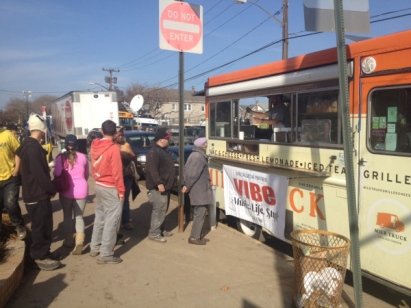 Nobody in the New York area will forget Hurricane/Tropical Storm Sandy any time soon. Even those of us lucky enough not to have lost power or been forced to evacuate know many people who did. While the region did much to prepare, Sandy still ended up being a bona fide natural disaster, with major property damage and, sadly, more than 100 fatalities along the east coast. As with watershed events such as 9/11, the 2003 blackout, and the 2005 transit strike, people are already referring to the pre- and post-Sandy eras, as if our collective mindset has been permanently changed by it. And so, in the post-Sandy era, we at Vibe Media, the parent company of Vibe, Vibe Vixen, Uptown, and BlackBook, felt bad for those who had lost so much, and decided we’d feel better if we did something to help. And so we have. We’re sending a food truck—the Milk Truck, to be specific—to the Rockaways to distribute comfort food to hurricane victims. It’s there right now, and I must say, I feel good about it.

It happened like this. Despite the loss of several productive days at the end of October—our office is on 19th Street in Manhattan, and was without power for a full week—the company had a good month in October. We surpassed our page view goals, which normally means that everybody gets a small bonus to recognize their contributions. Nothing too earth-shattering, but enough for a fun night out, which is definitely something we’re into.

But Uptown executive editor Chrystal Parker had the idea of putting our bonuses toward hiring a food truck to deliver food to those most affected by the storm. It was a great idea, and before long everybody was signing their little windfalls over to the cause. When you add all that up, and then double it, thanks to a company match, we had enough to actually make a difference. And that’s what’s happening right now, as I type these words. The Milk Truck, famous for its grilled cheese sandwiches, soups, and other comfort food items, is currently parked at Beach 129th Street and Rockaway Beach Boulevard, dishing out hot meals between noon and 4pm to people working to reclaim their lives and homes.

Fixing the damage will take months, if not years, and millions, if not billions, of dollars. But there’s plenty of value in grilled cheese and soup box lunches, each served with a sweet gherkin. Not only are they warm and delicious, they also tell victims that there are people in their community who care about them, and want them to know that they’re not alone. I’ll forgo a night out on the town for that, and it’s nice to know that the people I work with will too.