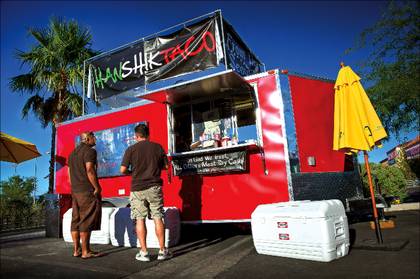 What do you get when you take two food trucks, a Las Vegas Weekly writer (not me, a real writer), three local chefs and the foremost cupcake clan in Vegas? Food Truck Throw Down Episode 1!

For the inaugural event on December 11 it was Han Shik Taco vs. Slidin’ Thru. The OG truck on the block is Slidin’ Thru, led by young sensation Ricardo Guerrero, competing against newer kid Han Shik, which features a not-so-new idea—the Korean taco. Both teams were tasked with bringing their best; the only criteria, said the master of ceremonies (and Weekly critic) Brock Radke, was “deliciousness.” Each truck threw down two dishes and one side dish—from Han Shik, a taco, a dog and some fried dough and from the slider folks, a slider taco, a slider and some sweet potato tater tots. The food was tasty and it was a good throw down, but Slidin’ Thru took it by a slim margin!

I think the bigger question that this raises is what is the saturation point of the food truck phenomenon? This isn’t LA or NYC; there aren’t millions of potential munchers divided into hoods and boroughs able to sustain more than around five or six mega truck concepts. So when are there officially too many? And what happens when even loyal eaters get menu fatigue? There are only so many times you can hit a truck and have the same half-dozen offerings before you say, “Been there; done that and might even have the T-shirt.”

I’m not a genius—I’m not even kinda smart—but I’ve been in the food game long enough to know a few certainties: 1. It’s not going to be long until there are too many trucks that thin the market to where it’s a tough game. Only the strong and creative will survive. 2. The survivors will have to evolve, i.e. new menu items, theme nights and clever branding. 3. For shizzo, there are even more trucks coming.

But even when the popularity wanes and we move on to new obsessions, the fact remains that, well, we all gotta eat and food trucks are a cool way to score some grub. Plus, these trucks are from locals for locals. And I love that.