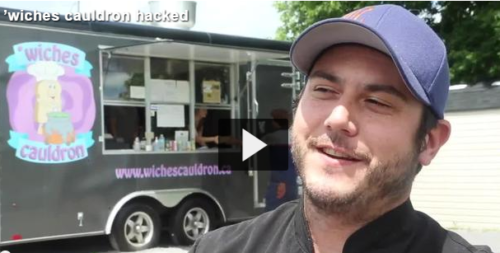 About 30 kilometres from Ottawa’s downtown core, in a gravel lot off Carp Road, sits the ‘Wiches Cauldron.

It’s an unassuming food truck known for its fresh food, friendly service and normally busy lunch lineups. But on Wednesday the line looked a little different: mixed in with the usual crowd were reporters and cameras.

That’s because the ‘Wiches Cauldron’s website was hacked Wednesday morning by an apparent pro-ISIL group.

“I found out at about 7 a.m. when a customer who was trying to gain access to the site to see the menu messaged us to say, ‘I’m pretty sure you’ve been hacked,’” said Craig Beaudry, the truck’s co-owner.

“So we checked it out, and it’s been very, very hacked.”

The website, which Beaudry describes as normally “fun, light-hearted and all about food,” is used to showcase the constantly changing menu.

Now the screen is black with white and red font that reads, in part, “Hacked by Team System Dz. I am Muslim & I love jihad I love Islamic State <3.”

Why a Stittsville — yes, Stittsville — food truck was hacked by a group claiming to have ties with the ISIL? Beaudry said he thinks it’s as ridiculous as it sounds.

“We’re just a little food truck in Stittsville; I have absolutely zero idea why this happened,” he said while laughing. “I couldn’t even begin to fathom it.”

Beaudry said he called the police right away, but “I got the run around so much that it was almost like dealing with Rogers.

“I got referred to the same people over and over. I’m still working, so I didn’t have the time to deal with that.”

Carmen Lai, who was at the truck at lunchtime, said she comes to the ‘Wiches Cauldron at least once every two weeks, and though she regularly visits the Facebook page for updates, she said she hadn’t seen the site.

“Seems like they just want attention,” she said, looking at the hacked site on a phone. “Which I don’t think they should get.”

In fact, Beaudry said, the only people who seem to have seen their hacked site, beside the media, were long-time customers who took the time to message him.

“So I can’t see anything negative coming from it. Business has been fantastic today,” he said.

Craig Beaudry, a local chef who runs “‘Wiches Cauldron” food truck in Stittsville with his wife, was flabbergasted this morning when he learned that his food truck website was hacked by a group claiming to be ISIS and now his homepage was spouting pro-ISIL doctrine.

And while Beaudry couldn’t understand why his truck was the subject of an online attack by a band of alleged ISIL supporters, it’s not too surprising if you spend a bit of time digging into “Team System DZ’s” background. 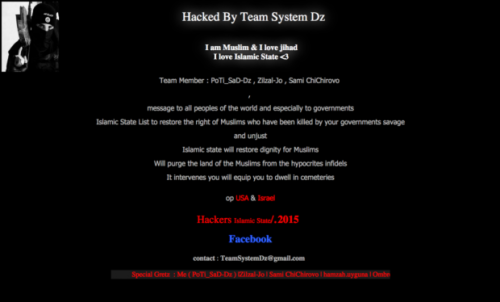 The group has been a headache for law enforcement officials all around the world in recent months. They use an extremely low-tech hacking technique to deface websites all over the Internet. The group uses a readily available piece of software that simply searches the Internet for unpatched web servers and then takes over those servers and slides in the group’s rant about the ISIL.

According to Zone-h, an online security researcher that monitors online attacks as they unfold, as many as 1,504 websites around the world have been attacked by the group since January 26.

All of the sites were running on some version of Linux, which the hacker’s software targeted in order to gain access to the sites and change them. Hacking the unpatched websites was as easy as pressing a button, then sitting back and waiting for the sites to be changed.

The Canadian Internet Registration Authority said it was investigating the hacks to try and determine how to best deal with the group.

Beaudry says he doesn’t mind the free advertising, but he hopes to get his website, which is designed and managed by his aunt and cousin, back online soon.

“I’m assuming we can get it back. There’s got to be a way. Fingers crossed. We’ve got too much invested in the actual website to give up on it.”

At the end of the day, after wrapping up, Beaudry finally got a chance to get in touch with police. He said he’s filed a report and police are investigating.