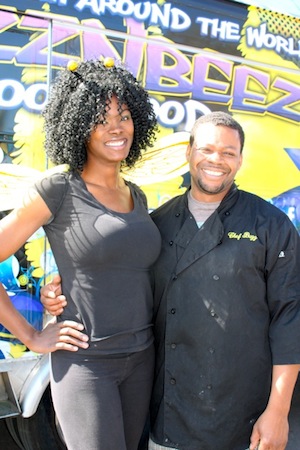 Yesterday, we introduced you to one of Phoenix’s newest food trucks: Buzznbeez Good Food Truck. As the latest apple to fall not-so-far from Mrs. White’s family tree, you can be sure to find down home Southern cookin’ and friendly service from this purple and yellow truck.

Today, we’re back with the second part of this week’s Chef Talk to introduce you a little more to Chef Buzz and his partner, Bee.

“Chef Buzz” or Christian Buze (yes, that’s his real last name) has been in the kitchen as long as he can remember and can pinpoint exactly when he first realized his own talent for cooking. After getting in trouble at church, Buzz faced a sentence perfectly fitting his impressive culinary linage: carving chickens. Although he was just 11, he finished the task in record time, and from that point on, he made a regular appliance in his grandmother’s restaurant kitchen.

“I remember being 11 years old and prepping chicken and putting it in the deep fryer,” says Buzz.

For the last decade and a half, Buzz worked in the car business but always knew it wasn’t his true calling. After growing tried of hearing complaints, Bee was encouraged to make his dream a reality.

“We made the decision to start a food truck…and I put in my two weeks the next day.”

Now he uses his highly developed people skills to sell fish fillets instead of autos and spends his time doing what he loves most: cooking.

Bee works as the marketing department, operations manager, and front of the house all rolled into one. As the inspiration for the bumblebee lady painted on the side of the truck, she often wears yellow wings and an antenna headband to large events.

“When I drive the truck, I’ll have my headband on and people wave, and I feel like I’m Ms. America…or Ms. Bumble America,” says Bee.