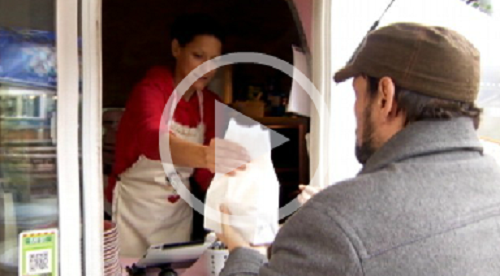 An Oregon food-truck owner and her family nearly had their holiday ruined after a thief a stole all the business’ Thanksgiving profits.

And that’s a big deal for a business that specializes in pies.

“I worked really hard the week leading up to Thanksgiving,” Mary Sheridan, who owns and operates The Honey Pot food truck in Portland, said. “I made as many pies as possible and we did really well.”

Sales plummet for most food trucks at the end of November after the Thanksgiving rush, Sheridan said.

“Things don’t often pick back up until the spring,” she added.  “I was relying on that money to help get me through the winter.”

But when Sheridan returned to the truck Saturday, after taking Black Friday off to rest from a grueling week, she found all the money in the truck, totaling $1,800, had been stolen. A single apple pie was also taken, along with a 10-inch chef’s knife.

“I guess they needed something to cut their pie with,” she joked.

But having worked so hard for what was to be the final weekend of her busy season, Sheridan didn’t feel like joking when she found the padlock on her truck had been removed and the money stolen.

She normally never leaves money in the truck overnight and police told her they had no leads to follow and probably wouldn’t be pursuing the case.

Sheridan decided to vent her frustration by posting a strongly worded letter on her truck shaming the thief. The single mother wanted whoever stole her money to know that they’d stolen not just from her but also from Sheridan’s two young children and from a small business that struggles this time of year.

Friends and family urged Sheridan to post the memorable letter to her business’ Facebook. She also posted it to Twitter. Customers and the community suddenly responded with donations, extra large tips, and by buying lots of pies. At a friend’s suggestion, Sheridan placed a donation button on her website. Money flooded in through that, too.

“The letter,” Sheridan said, “was just my way of getting revenge. I never expected to receive donations. And Sunday, which was dreary and cold, was my busiest non-holiday sales day ever.”

As of Monday morning, Sheridan had received $3,200 in contributions, double the amount that was stolen and plans to give the additional money to a charity. To pay it forward, as she describes it.

“There are a lot of generous people out there,” Sheridan said.  “I want whoever stole from me to know that there are better ways to help yourself than by stealing from others.”

Portland, OR: Portland’s Incredible Food Cart Scene Is in Danger