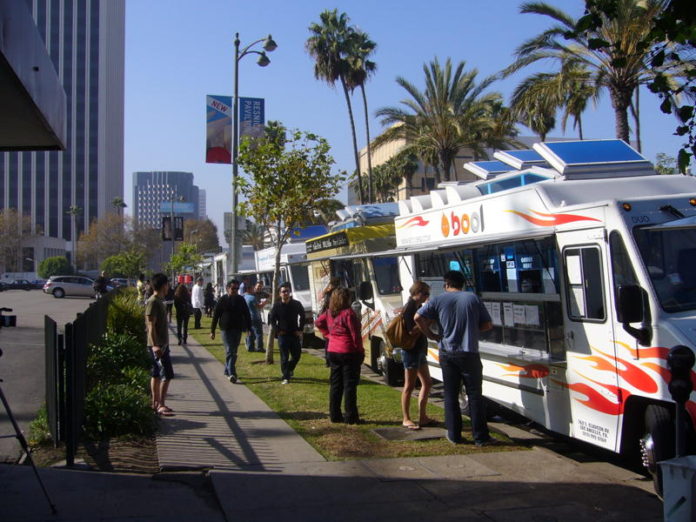 One of the first things I noticed about my new Miracle Mile neighborhood when I moved here in June was all of the food trucks that lined Wilshire Boulevard at lunchtime. There were at least ten every day. It was a great thing — people who worked in the office buildings could just step to the curb and get good food at a reasonable price.

As the months went on, I noticed fewer and fewer trucks, and more cars parked in the spaces that the trucks used to occupy. I didn’t think anything nefarious was going on until one day I saw fliers on each of the cars. They said that the cars belonged to the restaurants across the street in Museum Square, and that they were parked there every morning so the food trucks could not. I took a closer look at the cars. For lack of a better word, they were all pieces of crap. They were from the 1990s, all with sun-bleached hoods and roofs, probably picked up by the restaurants for a few hundred dollars. They also all had tickets on them.

I did a little research, and indeed, they fliers were correct. The restaurants were trying to stem the business they were losing to the trucks by parking cars there, so the trucks could not. They apparently don’t care about the cost of the tickets (my estimate — around $1000 per day, based on 18 cars at $50 per ticket), figuring they are losing more than that from the trucks.

Sadly, it appears the restaurants have won the battle. The trucks now park unmolested a few blocks east. But they have the last laugh — while they are probably making  just as much money as before, the restaurants are still racking up the tickets. However, every now and then a truck manages to squeeze in between the cars in the old location.

It doesn’t seem fair that the restaurants have forced the trucks away, but as long as the restaurants are paying their tickets, they are not doing any wrong, legally anyway. Morally it’s a different story.

Right now it is the Wild West for food trucks — they are no regulations at all. The city is working on regulating the trucks, which the folks at the food truck association are actually in favor of. That’s smart of them. I’m sure those regulations will include where they can legally park, and the trucks need that.

I wonder if they could set up special food truck zones. Actually, the spot on Wilshire where the trucks used to park is perfect for that. It is in front of two office buildings that provide parking for guests. And there is plenty of street parking elsewhere in the area. Perhaps it could be “Food Truck Parking Only” from 11am-2pm or something like that. There are probably plenty of areas in the city where that could be done.

But what about those nearby restaurants? Don’t they deserve some protection from the trucks taking their business? Well, I think if they serve good food at good prices (which some people say they do not), they’ll be fine. Two businesses there have already failed, soon to be replaced with a Starbucks and a hamburger joint. I’m sure they will do well whether the trucks are there or not. And the trucks certainly deserve to be there.