By Adam Uren  |  Bring Me The News

The City of Rochester launched the survey in November, with the results expected to be factored into future city council debate over food truck regulation.

And of the 1,867 people who responded, an overwhelming majority of almost 80 percent are in favor of allowing food trucks, according to the survey results released this week. 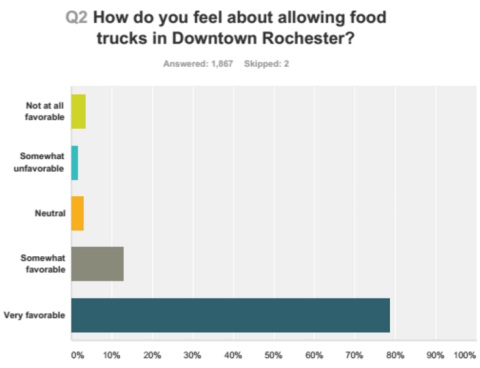 Most respondents said they would use food trucks regularly, many of them weekly, though about 85 percent of people said food trucks should be required to obtain an annual permit to operate.

According to the Rochester Post Bulletin, the city’s ordinance prevents a food truck from vending on a street for more than 15 minutes, and that their new location needs to be more than 500 feet away from the previous one.

In a comment piece in November, the newspaper said concerns have been expressed by downtown restaurant owners who worry the food trucks won’t have to pay the same fees, taxes and other expenses they do.

The food truck debate stemmed from an attempt by BB’s Pizzeria last summer to run a food truck downtown before falling foul of the city’s ordinance, KTTC reports.

It found a helping hand however from the privately-owned Calvary Episcopal Church, which allowed the restaurant to operate a food truck from its parking lot, with some of the proceeds going to the church and local organizations.

With the survey results in, the city council is likely to revisit the food truck discussion later this year.