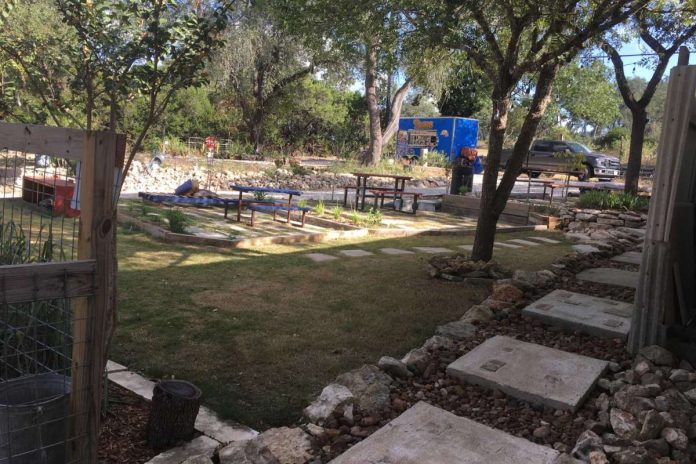 By Chuck Blount | My San Antonio

A new San Antonio food truck park named The Divide opened Thursday on Babcock Road just outside of Loop 1604 on the Northwest Side. It features a beer and wine bar, ice cream and enough space to house at least four food trucks on the property.

Owned by the Galvan family, who have spent more than two years developing the former farmhouse property into an outdoor oasis, there is a music stage, a fenced dog park, private party space, plentiful outdoor seating areas, and it’s far enough outside the city to get away from the noise. The Divide is named after the Kremkau Divide, a ridge that goes directly through the property.

“We have put a lot of energy into this project, and it feels good to finally be able to open the doors,” said co-owner Liza Hunter-Galvan. “Much of the decor was sourced from repurposed and salvaged materials, helping to give the space the rustic look.”

The bar is loaded with more than 20 different types of domestic, craft and internationally sourced beers and seltzers. Currently, the Aye Chihuahua food truck occupies a space at The Divide, serving up tacos and Mexican food plates.

“The goal is to have a family-friendly environment where you can go, spend a few hours and relax,” Galvan said. “There’s also plenty of space to socially distance.”

Sports and running enthusiasts would be quick to pick up on the Galvan name. Liza is a two-time marathon participant in the Summer Olympics (2004 and 2008), representing her native New Zealand. She finished her competition racing career in 2016 after winning the women’s division of the Rock ’n’ Roll San Antonio Marathon.

And to reward runners or cyclists who opt to stop in for a beer or a meal after a workout, there is an outdoor shower area for whoever wants to rinse off the sweat for free.